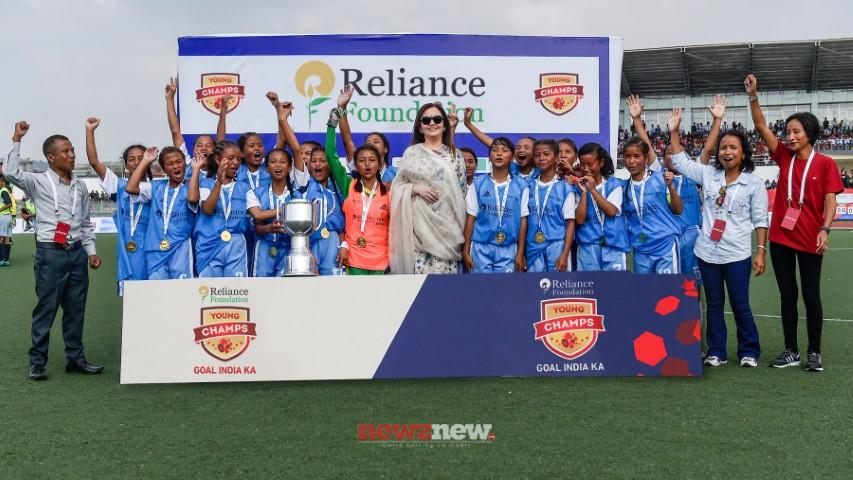 The Naupang League aims to develop local ecosystems and enable aspiring and talented footballers as young as 5 year-olds both boys and girls to gain competitive and practice exposure. The focus is on a broad base of multi-tier, age-group engagements that operate all through the year and meaningfully engage players.

Mrs. Nita M. Ambani, Founder Chairperson of Reliance Foundation, said, “Football is a way of life in Mizoram, woven into its social and cultural fabric. This partnership between RF Young Champs and Mizoram Football Association will provide high quality training to talented young boys and girls. It will enable budding footballers as young as 5 years of age gain competitive exposure and enhanced play time. I’m excited about the immense possibilities it will open up for children in Mizoram, a state that is heavily invested in football. At RFYC, we remain committed to unlocking the potential of grassroots football across India and helping aspiring footballers achieve their full potential.“

Lalnghinglova Hmar / Tetea Hmar, Honorary Secretary, Mizoram Football Association & Executive Committee Member, AIFF, said, “We are extremely happy with the partnership forged between Mizoram Football Association and Reliance Foundation, and this project can be a game-changer for Mizoram and Indian Football. The community participation in the proposed Naupang League will add a different dimension to the competition as it will be a collective participation of kids, parents and the local community which will drive and motivate the team like never before and fuel the competitiveness of the league. The pilot project in Mizoram which we are confident will be successful, can be used as a blueprint for grassroots development, and the first of its kind, in Indian football. We are looking forward to the kick-off and in the same year the FIFA Under 17 Women’s World Cup is in India and FIFA Men’s World Cup 2022, will give extra enthusiasm to the kids. MFA is glad that Reliance Foundation has been providing a platform to young kids so that they can bring alive their sports dreams.”

The RFYC Naupang (Children) League will be hosted in 4 locations in Mizoram with 2 models of the league structure. The Mizoram FA and District FAs will host the leagues in Lunglei and Kolasib, enabled by RFYC, while 2 Leagues in Aizawl and Champhai will be owned and operated by Reliance Foundation Young Champs.

The age categories begin at Under 06 and continue until Under 13 years with multiple game formats. A minimum of 30 games will be played by the kids. RF Young Champs will further integrate with RF Youth Sports in the region to ensure additional games and competitive exposure to deserving players.

The Mizoram football ecosystem is set to benefit immensely from Reliance Foundation’s Young Champs as its programs include Coach Education and Development; Referee Development; Weekly Coaching Program for Kids; Quarterly Camps (local) for Emerging elite; Enablement of Inter District Championship; and Reliance Foundation Young Champs camps in Mumbai for Best of the Best and understating match day operations better. RFYC has also donated an ambulance to the Mizoram Football Association.