newznew (Chandigarh) : In continuation to its efforts to inculcate road safety measures in Indian 2Wheeler riders, Honda Motorcycle and Scooter India Pvt. Ltd. (HMSI) undertook a mammoth nationwide ‘Honda Road Sign IQ Survey’  with an objective to understand the level of awareness of road safety signs and behavior of two-wheeler riders in India. 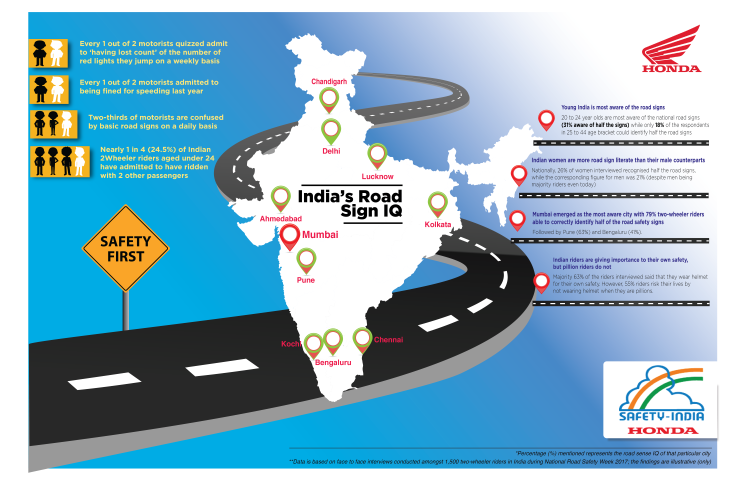 While India is the World’s biggest two-wheeler market… but road sign literacy of the nation remains low!

According to Honda Road Sign IQ survey, 78% of Indian 2Wheeler riders cannot recognise even 50% of the road signs!

Within the cities, Mumbai emerged as the most aware city with 79% two-wheeler riders able to correctly identify half of the road safety signs, followed by Pune (63%) and Bengaluru (41%).

The survey re-affirms the need for greater Education within the 3Es of Road Safety (Enforcement, Engineering & Education) as nearly 80% of Indian 2Wheeler riders are still un-aware about the difference between cautionary and mandatory road signs.

As more and more women are now becoming empowered riders, Indian women are more road sign literate than their male counterparts. Nationally, 26% of women interviewed were recognised half the road signs, while the corresponding figure for men was 21% (despite men being majority riders even today).

Educated young India leads awareness of road signs, though by a small margin!

Most Indian riders understand importance of a helmet but only when they themselves ride a two-wheeler. 55% riders risk their lives by not wearing helmet when they are pillions.

51% of riders interviewed said they have neither fined nor did they jumped a red light in 2016 but risky riding still continues as 30% riders admitted to red light jumping 1-2 times a week.

Elaborating on the survey findings and Honda’s efforts in the direction of road safety promotion, Mr. Yadvinder Singh Guleria, Senior Vice President – Sales and Marketing, Honda Motorcycle & Scooter India Pvt. Ltd. said “Two-wheelers account of the highest fatalities (31.5%) due to road accidents in the country. With a new two-wheeler coming on Indian roads every 2 seconds, ‘Safety for Everyone’ is Honda’s priority as a responsible corporate. Honda Road Sign IQ survey re-affirms that there is an urgent need to invest in behavioral change in Indian mindsets through road safety education. We have already educated over 10 lac people on road safety in India at Honda’s 11 adopted traffic parks across India. A sizable 38% of these are kids as Honda aims to mould youth of today into responsible road users of tomorrow.  Post this survey, Honda is committed to intensifying its road safety initiatives with special focus on children and empowering women who are the conscience keepers of every family.”

Reinforcing its commitment to the promotion of road-safety, Honda engaged over 24,000 people children and females in 250 cities across India. Supporting Honda in this celebration were various stakeholders of the society including Defense personnel, Corporates, schools, several State police departments and NGOs etc.

Spreading the awareness, nearly 10,000 Indians took ‘I am a Safe Rider’ pledge with Honda.

Leading the road safety cause from the front, Honda 2Wheelers is the first two-wheeler brand in India to adopt 11 traffic training parks across India (Chandigarh, Ludhiana, Jaipur, Delhi * 2, Bhubaneswar, Cuttack, Yeola (Nashik), Hyderabad, Indore and Coimbatore. During the week, Honda educated close to 6500 individuals at its traffic parks.

Many unique engagements across India included an awareness rallies in multiple cities where in more than 850 customers spread the message of safe riding on their Honda motorcycles and scooters; awareness walkathons in Delhi and Bhubaneswar; helmet awareness rally for pillion riders in Delhi. Additionally, Honda’s safety instructors helped close to 7600 riders improve their risk prediction ability on roads with the riding simulators during the National Road Safety week.

Center Govt would be pressurized to punish the `84 riots guilty...