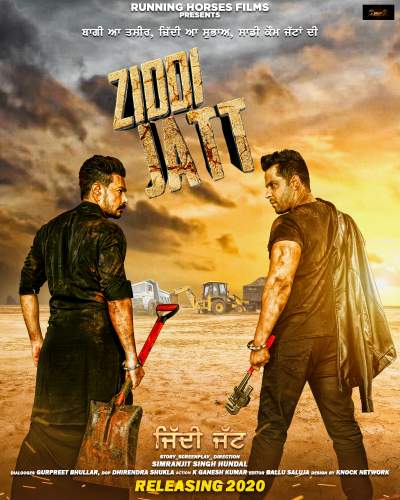 The film has been recently announced by the makers on their official media accounts. The film is starring Ranjha Vikram Singh and Kuljinder Sidhu on the main lead who are presented in the most uncommon looks.

The story and screenplay of the film is penned down by Simranjit Singh Hundal who’s recent directed Nanka Mel is going to be released on 8th November 2019. Also, the previous film under the same banner titled ‘25 Kille’ too was written & directed by him as well.

He was also nominated for the best male debut actor in ‘25 Kille’ and had won the title for best action in the film. This time he is coming up with Ziddi Jatt where the title only reveals that the film will be full of action and entertainment.

On the other hand, Kuljinder Sidhu’s look in the official poster is impressing the audience. Kuljinder Sidhu too is an Indian actor and producer who is famous for his fitness and several films. His acting skills in films like Shareek and Yoddha were appreciated by audience.

Also Read :   Sprite Till I Die adds a dash of creativity to Chandigarh !

The shooting of “Ziddi Jatt” will begin in the first week of December. The action of the film will be under the supervision of K Ganesh Kumar who had worked in various super hit action films. The editor part will be handled by Ballu Saluja. The film will have some energetic dialogues which will be given by Gurpreet Bhullar. Also, the makers had promised to present the best music from top singers of Punjab in Ziddi Jatt.

The release date and the details of the other star cast has not yet revealed but the film is announced to be released in the summer holidays of the year 2020. As the trend of action in Punjabi film is growing rapidly, the fact exciting the audience will be the unique concept of the film which will be seen after the release.