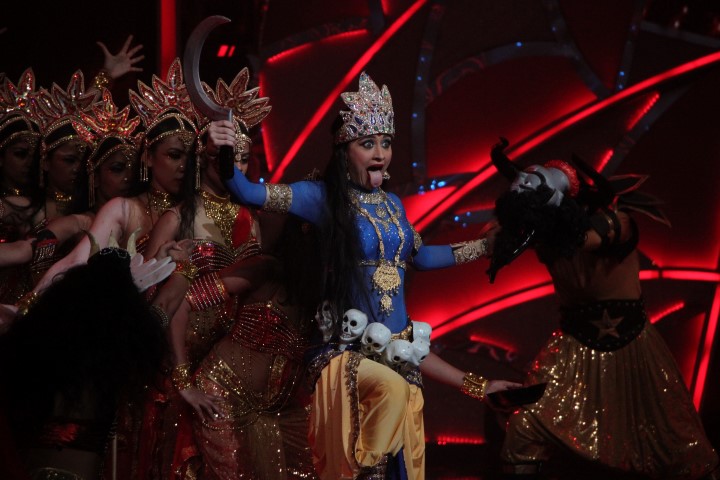 NewZNew (Chandigarh) : Time and again, the gorgeous and talented actor Sanjeeda Shaikh has floored audiences with her gripping dance performances across various awards and reality shows. She’s proved her mettle yet again while performing an intense act for Zee TV’s Fem Gold Ultra presents Fempowerment Awards. The petite actor had to portray the feisty avatar of goddess Durga, slaying demons in the course of a power-packed dance act. The impactful choreography was only heightened by the actor’s expressive face and ability to convey strong emotions. Considering Sanjeeda had to emote and express while dancing vigorously and wielding complicated props, she was exhausted after hours and hours of rehearsals but the dainty actor did not stop even for a bit and carried on like a true professional. She kept doing every step over and over again until she and the choreographer were convinced that she was doing it with finesse and precision. In all this while, she didn’t let her energy levels drop. The moment her act was done, she received thundering applause from everyone at the awards show. The Fempowerment awards will air on 28th August at 1 PM only on Zee TV.

Sanjeeda shares, “When you have to depict goddess Durga – an epitome of strength & aggression, it has to be done with utmost vigor, passion and intensity. It calls for high energy levels. I was dead tired by the time we were done rehearsing the rigorous steps but kept on pushing myself so that the final product turns out to be a memorable act. I guess I just tried my best to deliver what was expected from me.”

As a broadcaster committed to empowering women and making a difference to Indian society, Zee TV has associated with the awards and will telecast the ceremony on 28th August. Zee TV & Zee Studios Business Head Akash Chawla commented, “As a powerful medium of influencing positive changes in society, Zee TV has pioneered socially relevant television programming and addressed pertinent, topical issues over the years. The objective of Fempowerment Women Achievers’ Awards is in sync with our commitment towards the cause of empowering women. The idea is to recognize and acknowledge the contribution of women achievers across fields who will be role models to countless other women in India.”

Karan Butani’s Association With Tigmanshu Dhulia Made Him Confident About Making...