Citizens Awareness Group and Delhi-based NGO, Consumer Voice, underlined the need for strict implementation of the Cigarettes and Other Tobacco Products (Prohibition of Advertisement and Regulation of Trade and Commerce, Production, Supply and Distribution Act, 2003 (COTPA) in the region to protect children from tobacco consumption. 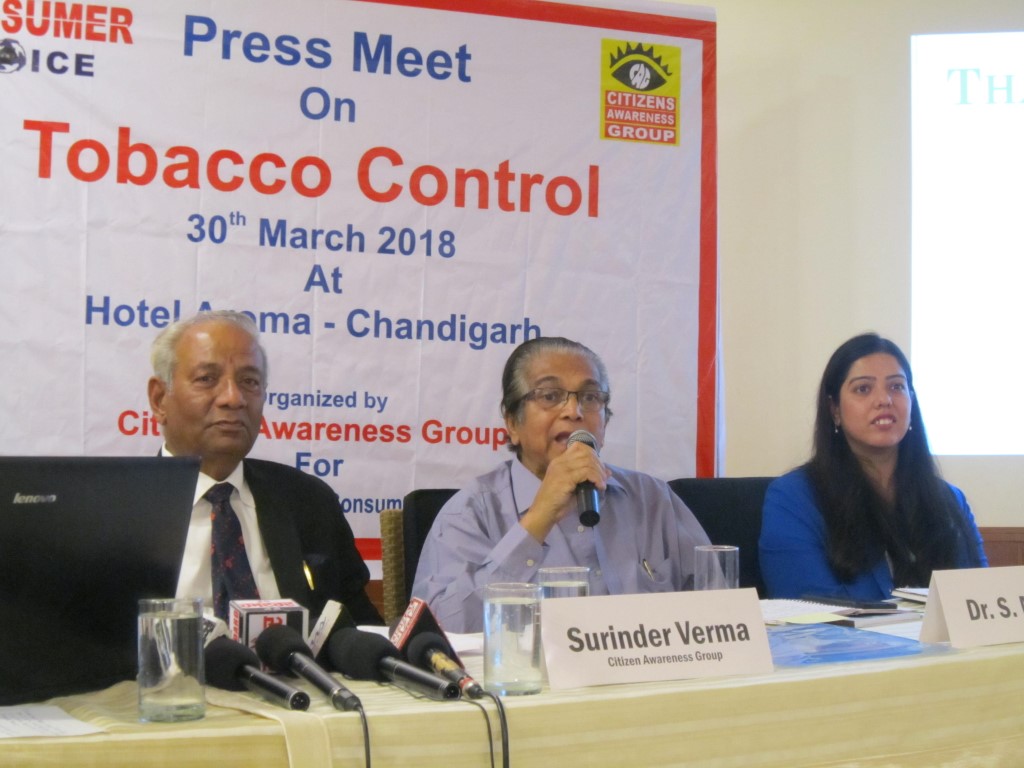 Addressing media here today at Hotel Aroma, Rinki Sharma, Head Projects & CSR for the Voluntary Organisation in Interest of Consumer Education (VOICE) said that the need is to strictly ensure the implementation of the Act especially where the lives of school children and youth to tobacco products is at stake.

An Indian Council of Medical Research (ICMR) report says that tobacco use accounts for about 30 percent of all cancers in men and women in India while tobacco related cancer accounts for 42% of the male deaths and 18.3% of female cancer deaths.

According to National Family Health Survey 2015-16, in the past one decade, the number of men using tobacco products in Punjab has increased from 19.2% to 34%, and Chandigarh itself has 17 percent population consuming tobacco.

Global Adult Tobacco Survey (GATS) India in its 2016-17 reports that out of the total population in Punjab, 7.3% smoke tobacco and 8% use smokeless tobacco.

Dr S.M. Bose, former senior professor and head of Surgery and Emergency in PGI, who has also authored a book, among others, on ‘Cancer’ said that tobacco is a slow poison and there should be total ban on its consumption.

He lamented to increasing trend amongst urban women to adopt smoking which the studies have proved cause breast cancer too.

Dr Bose said 114 people die every hour in India due to tobacco use, and expressed his dismay at the results of a recent survey by PGIMER in 25 government schools of Raipur Rani where it found 25 percent children consuming tobacco.

Surinder Verma, Chairman, Citizen Awareness Group, informed that along with Consumer Voice special initiatives are being taken to sensitize all stakeholders and would be approaching the authorities to effective implementation of COPTA, by not only banning the use of its sale within 100 yards of the school premises as also making licensing of the vendors selling cigarettes and all type of tobacco products.