SSC is going to organize the Combined Graduate Level examination 2017 from August 5 and over 3 million aspirants are waiting for the release of CGL admit card. As per the standard process, the admit cards for SSC examinations are released by Regional Offices of Staff Selection Commission and the applicants are required to download the admit cards/ admission letter from the official websites of respective regional offices. Read below for current updates on SSC CGL admit card 2017 region-wise. 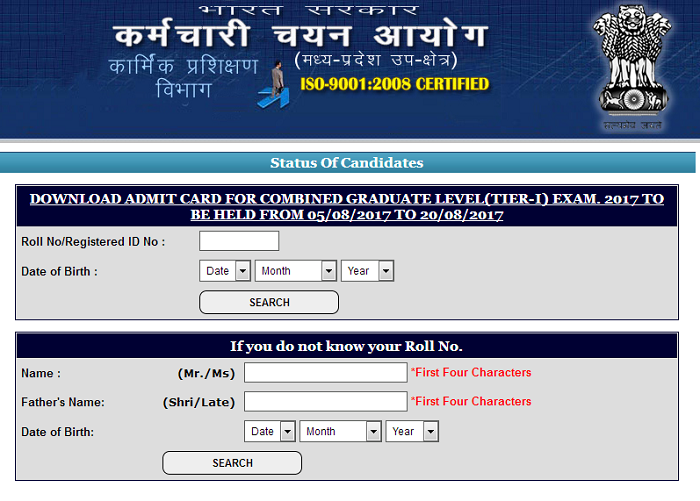 SSC CGL Tier 1 exam is proposed to be conducted from August 5 to 24, wherein there will be no exam on August 7, 13, 14 & 15. Through SSC CGL admit card, the applicants will come to know the exact date, time and venue of their test. So far, only Madhya Pradesh region has uploaded the CGL Tier 1 admit card, while the rest of the regions are expected to follow them latest by tomorrow. Few hours ago, the link to download SSC CGL admit card in Western Region website was also active, however, the same is not working currently.

The candidates can download SSC CGL admit card through two methods: roll number/ registered ID number and date of birth OR Name, Father’s name and date of birth. Either way, one should check for correctness in the details and take the print out of admit card so as to carry on the exam day.

Central Region (CR) – yet to be released

Eastern Region (ER) – yet to be released

North-Western Region (NWR) – yet to be released

As per the reports, total 30,26,598 applications have been received by SSC for CGLE 2017 examination. The exam comprises of four phases/ tiers – Tier 1, Tier 2, Tier 3 & Tier 4. All the applicants are screened through the Tier 1 exam, while the performance of candidates in the remaining Tiers is used to finalize the selection lists.

CGL Tier 1 exam will be conducted as a single paper consisting of 100 multiple choice questions. The question paper will have four sections, each having 25 questions. The sections are: General Intelligence & Reasoning, General Awareness, Quantitative Aptitude and English Comprehension.

Updates on SSC CGL Admit Card 2017 release by other regions to follow.