‘Bikramjit Singh Randhawa’ maybe no one knows this name but B Jay Randhawa needs no introduction. This young boy of Punjabi industry is a perfect example of hard work, dedication and patience. He proved that if you are confident and determined to do something nobody can stop you. From starting his career in a stunt show on MTv to playing some small roles in movies like ‘Burrraahh’ to the most renowned anchor of Punjab he never looked back. 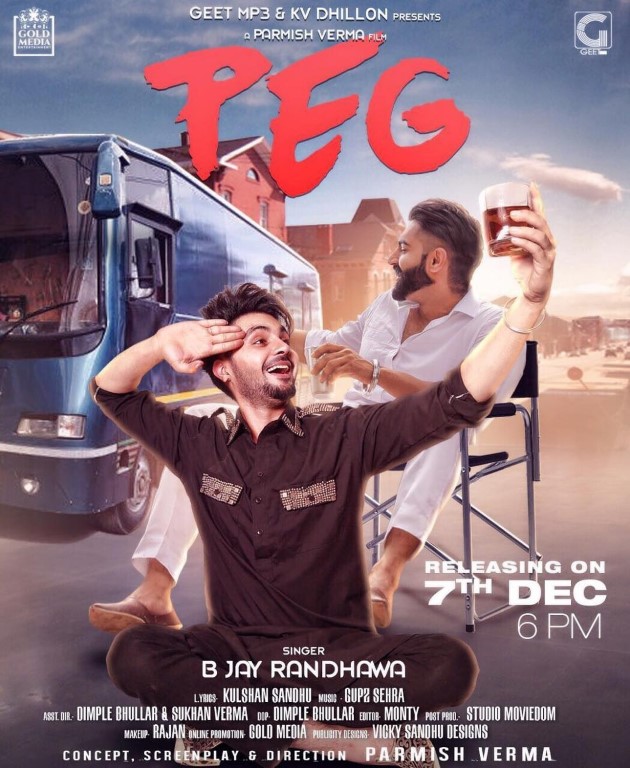 Last year, B Jay Randhawa took his career to another level with an instant hit single ‘Theth Gabru’. Then onwards he gave back to back hits like ‘Star’ and ‘Deewana’. Now recently he completed his hat trick with his third song of the year ‘Peg’. The song has already released and the response of the audience is amazing.

The enthusiastic lyrics of the song are penned down by ‘Kulshan Sandhu’. The bhangra beats to the song are given by ‘Gupz Sehra’ under the music label ‘Geet Mp3’. The direction, screenplay, and story of video are done by the most talented video director of Punjab ‘Parmish Verma’. Famous Punjabi singers ‘Guri’ and ‘Sharry Maan’ did cameo in the video. The song is released by ‘Geet Mp3’ and ‘Kv Dhillon’.

B jay Randhawa is very thrilled with the response of audience he said, “We firstly took 5- 6 months break after my last song then we planned to orient this song around Punjab. I tried something new with this song because my previous songs were urban but this song is all ‘Desi’. This is the song to which all the Punjabis can relate to”. He further added, “I am thankful to all the team members and especially to ‘Guri’ and ‘Sharry Maan’ for sharing their precious time and support”.

‘Parmish Verma’ said, “Song Peg is very different from the contemporary music. I think this is the first song where someone is doing bhangra when his girlfriend left him and I believe only b jay could do justice to this concept. Finally, I am obliged to the audience for their immense love and support to the song”.

Children with Down Syndrome, Parents felicitated