TNTET result 2017 for Teacher Eligibility Test (TET) 2017, Tamil Nadu has been declared. TNTET result can now be checked at Teachers Recruitment Board (TRB) website www.trb.tn.nic.in by the candidates. Candidates can check their TET 2017 result Tamil Nadu along with marks using the ‘individual result query’ option and then entering their roll numbers at www.trb.tn.nic.in online. 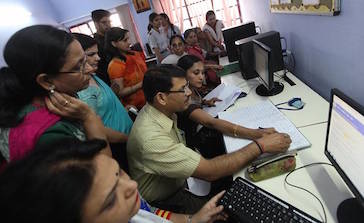 Official data released from TRB also states that a total of 7,53,815 candidates had appeared for TNTET 2017. Of them, 2,41,555 appeared for TET paper 1 while 5,12,260 had took TET paper 2. Paper 1 and paper 2 were respectively conducted on April 29 and April 30, respectively. The board had already issued the preliminary keys on May 22 and had also invited objections from candidates. The final answer keys have been published too now along with TNTET result 2017 and candidate’s individual marks. The valuation of answer scripts of candidates was done taking final key into consideration.

The links to check TET result 2017 Tamil Nadu have been given below. Candidates may also visit the TRB website to check TRB result of TNTET 2017. Results have been uploaded at trb.tn.nic.in for TET aspirants.

In it’s press note, TRB, Teachers Recruitment Board further also pointed out that many of the candidates have been rejected as their answer sheets were not evaluated due to the mistakes made by them. The evaluation process was computerised and here. Here are the noteworthy points regarding rejection or evaluation.

The candidates may refer to the official notification uploaded at TRB website for clarification on the issues. The individual marks can be checked here at this link.

ICSI Opens its Chapter office in Patiala, Fourth in Punjab