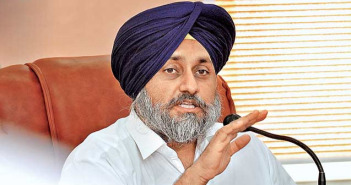 In a statement here, the Deputy chief minister also praised the Union finance minister for putting the focus back on agriculture and the social services sector.

Mr. Badal also thanked Mr Jaitely for giving due consideration to Punjab in his budget. “Earlier during the ten year UPA rule Punjab never even found a mention in the Union budget. I am thankful to the Union minister for allocating one AIIMS to Punjab besides a post graduate institute of Horticulture research to Amritsar besides announcing that the Jallianwala Bagh will be developed as a cultural and heritage centre”.

Mr Badal also heralded the decision to give visa on arrival to citizens of 150 countries in stages. He said the new visa regime would facilitate thousands of Punjabis residing in various countries besides giving a much need boost to the tourism sector.

Terming the budget as a dream budget for agriculture sector, Mr. Badal said an ambitious soil health card had been introduced to improve soil fertility and proposed allocation of Rs. 25000 crore in 2015 to rural development fund would be a game changer for states like Punjab. He said the announcement to set up the Post graduate institute of Horticulture at Amritsar had laid a foundation in the field of crop diversification. He said an allocation of Rs 5,300 crore for micro irrigation would result in much needed ground water saving.

Referring to proposed Micro Units Development Refinance Agency (MUDRA) Bank, with a corpus of Rs. 20,000 crore, Mr. Badal said priority would be given to SC/ST enterprises in lending. He said this corpus would boost Punjab’s economy as the State had the highest SC population across the nation. .

Mr. Badal also lauded the centre for initiatives being taken for Punjab and said this budget would strengthen the heritage significance of Punjab as Jalianwala Bagh had been put in the ultra modern landscaping restroration, signage and interpretation centre along with other basic amenities project.

The Deputy CM also lauded the pro poor measures taken in the budget, saying they would better the lot of the common man. These he said included the unique life insurance plan for the poor which would give an insurance cover of Rs 2 lakh upon a premium of only Rs one lakh per month. He also praised the budget for its focus on creating employment for the poor besides focus on health and education.