newznew (Chandigarh) : Soon after the attention of the entire nation shifted towards the need for fighting unwanted surgeries, especially, after the Central government’s stir against them, Max Hospital, Mohali launched a specialized fibroid clinic.

“Studies reveal that by the age of 60, every third women In India has already undergone hysterectomy or uterus removal surgery. Unnecessary surgery of the uterus leads can sometimes be fatal. Morbidity and post operative suffering with complications are an outcome that can easily be avoided and pain to the patient, family and children.” 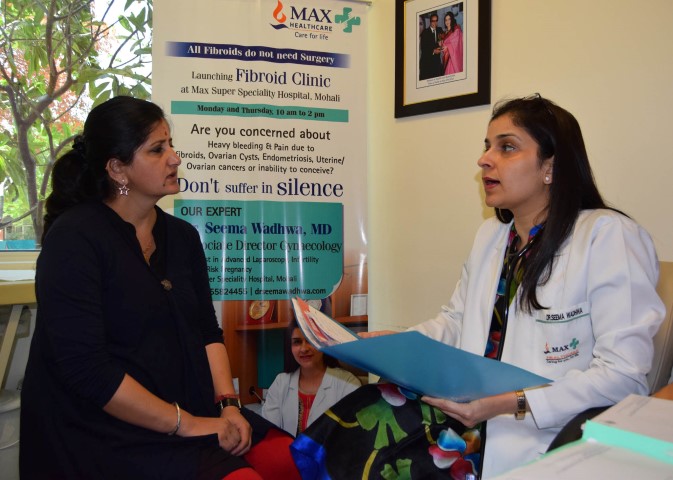 This wad stated by Dr Seema Wadhwa, associate director, Gynecology during the launch of  a specialized fibroid clinic at Max Hospital, Mohali today,

Our endeavour is to curb the increasing incidence of uterus removal surgeries for trivial problems. It is important to know when to say no to surgery, asserted Wadhwa who will be heading the clinic.

Speaking on the need for this clinic, Sandeep Dogra , senior vice president, Max Hospitals, Punjab  said that the clinic will cater to patients of fibroids, treating and guiding them according to observed clinical symptoms.

Fibroids, also known as Rasoli are smooth muscle tumours arising from the uterus and are found in women of all age groups. Mostly asymptomatic, they can manifest as severe pain during and after menstruation, excessive or irregular bleeding, pressure symptoms on kidney, difficulty in passing stools, inability to conceive, early miscarriages, increased chances of caesarean during pregnancy, pre term labour and the list does not end.

Dr Wadhwa stressed that with advanced medical management and specialized hormonal devices, trivial gynecological disorders can be treated successfully without surgery. Diagnostic tools such as advanced Hysteroscopy can assess the level of disease. Ultrasound and Hysteroscopy also helps to know the specific location of fibroids, she added.

Kejriwal announces installation of a Dalit as Deputy CM