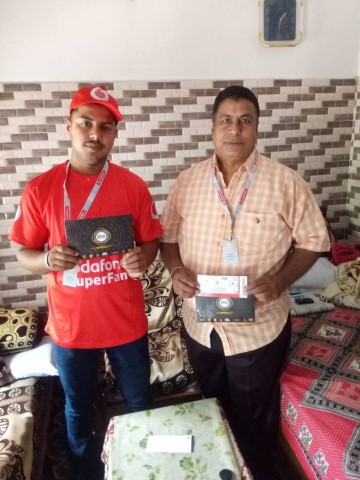 The 21year old student Hemant Thakur won a host of privileges from Vodafone, including being driven to the stadium in style with his father Vimal Thakur, watched the match seated in the special Vodafone box and post match, went on field to shake hands with and received the autographed match ball from the winning captain, even as millions of viewers watched from across the globe.

“I have always been proud to be a Vodafone customer. Winning the Vodafone SuperFan title is one of the happiest occasions of my life and has given me memories to be treasured for posterity. I am grateful to Vodafone for giving me the opportunity to be a part of IPL history!,” said a perceptibly elated Hemant Thakur.

The ever popular Vodafone SuperFan contestoffers a ‘once-in-a-lifetime’ opportunity to Vodafone customers to take centre stage on a global sporting platform. To celebrate the ten years of Vodafone’s partnership with this cricketing extravaganza, Vodafone SuperFantitle has become bigger and better with VodafoneSuperFanKiSuperwish, giving participants a chance to win some money-can’t-buy experiencesrelated to cricket in the country. On offer are – dinner with their favourite cricketer, joining IPL stars at net practice, participating in Extra Innings show on Sony, taking a selfie with the Vivo IPL trophy, amongst others.

Rajat Avasthi, Business Head- Punjab, Himachal Pradesh and Jammu &Kashmir, Vodafone India, said, “Over 10 momentous years, Vodafone and IPL have become synonymous with each other. Engaging and celebrating the fan has been at the core of Vodafone’s IPL strategy. The Vodafone SuperFan contest is a much looked forward to platform at each IPL tourney and its popularity has grown with the years. As we commemorate 10 years of Vodafone’s iconic association with IPL, we have made our campaign SuperSpecial and enhanced the aspirational value for Vodafone SuperFan with VodafoneSuperFanKiSuperWish. So even as Vodafone customers enjoy watching IPL matches on their mobile phones with Vodafone’s Data Strong Network, they can also participate in our exciting initiatives for Vivo IPL 2017.”

To participate, customers need to simply SMS SUPERFAN <CITY> to 199 or download My Vodafone App. Then look forward to being selected as a Vodafone SuperFan and make your SuperWish come true!