Slated for a release this Friday, Punjabi film ‘Yaarana’ is based on the game of football, got promoted in city today 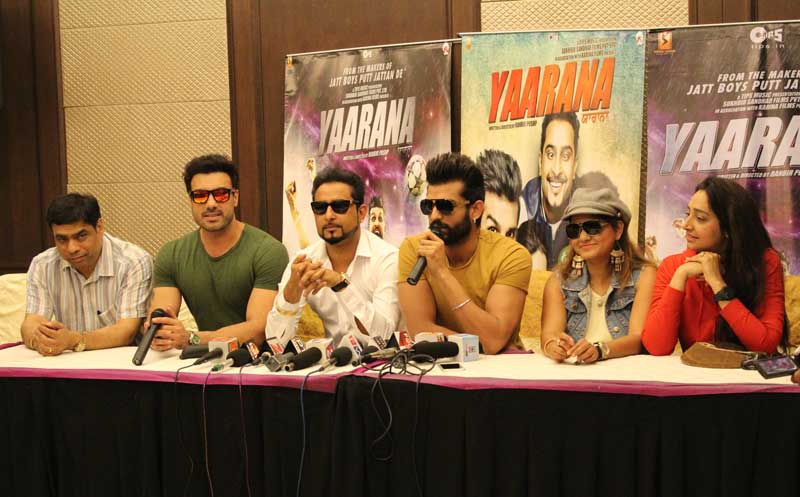 With a confidence of bringing a fresh breathe of air to the audience, the star cast and crew of ‘Yaarana’ came together to promote their latest movie at the Chandigarh Press Club here today. All set to release on April 24, the music of the movie gas already become a rage among the public and everybody is eagerly awaiting this melodramatic action and sports film.

Talking about the movie and urging everyone to watch the movie, stylish singer and actor Yuvraj Hans said, “I really enjoyed working in the movie and I am sure that the audience will like this entertaining film. We have all come together to entertain our fans and we want you to give us your blessings. This movie will see me romance the beautiful actress Kashish Singh and we share a great chemistry.”

Ranjana said, “Punjabi audience will love this movie that will steal their hearts and make them emotional on the other hand derive their love for football. This one is different and we have worked hard to make it good. Do watch the movie and give us your support.”

Director Ranbir Pushp said that from producing hockey legends to football heroes, the state has provided the country with sportsmen of mettle, courage, dedication, conviction, honor and dignity. The film is set in the Bhai Gurdas Group of Institutes, which had the history and culture of being the best sports college in Punjab.

“You all should watch the movie which promotes the sports culture of the state. April 24 will be a new day for Pollywood and the audience will like this movie,” concluded producer Sukhbir Sandhar.

Xiaomi launches its Flagship Redmi K20 series and Redmi 7A in...