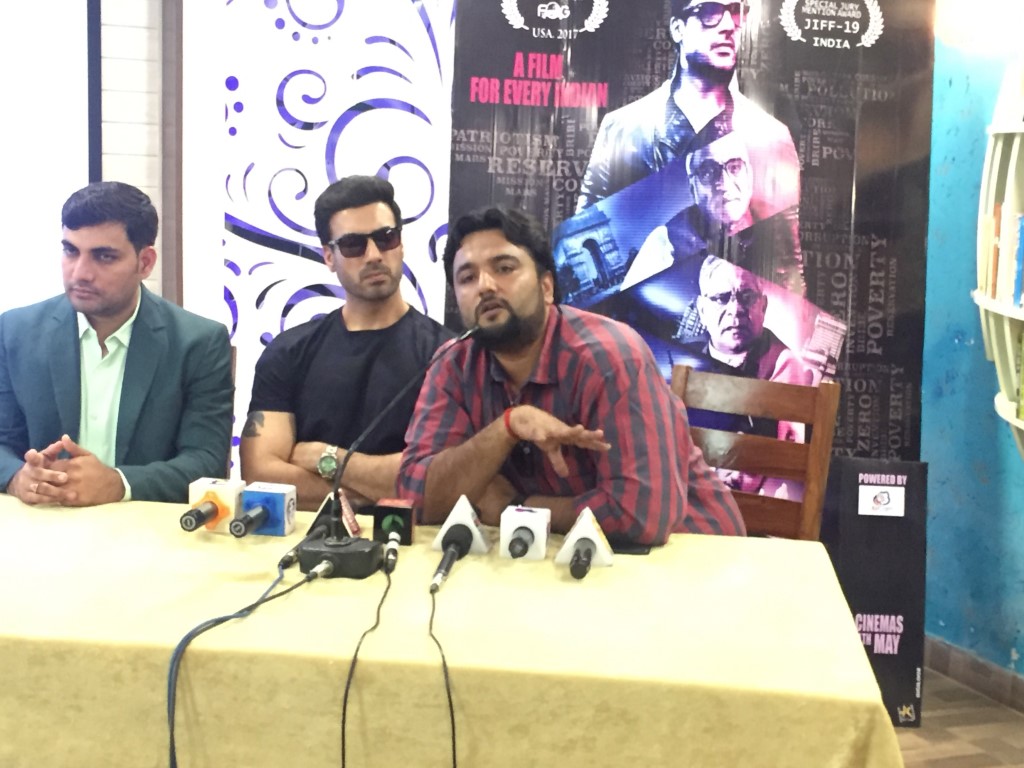 In fact these days a dialogue of the film Yeh Hai India is creating controversies. The film director Lom Harsh, Producer Sandeep Chaudhary and Actor Gavie Chahal have addressed the media on the arising controversies.
In the trailer of the film, one dialogue has been objected by not only the people of the country but also the neighboring country Pakistan. This dialogue of the film is being described as negative image of the neighboring country, with the lack of integrity of the country. There was also a lot of opposition at the time of the country division.
Today also many social institutions and various fields of society, including art, social workers, and politicians still consider division as a tragedy. In the beginning of the trailer of the film Yeh Hai India, it talks about the conservative views, pollution, population and poverty but in the next part it shows the ancient traditions and values of the country.
There is one dialogue in the film which talks about the law and order which has to be same   for all, if not, and then make a new Pakistan and fired the helpless and poor people.
This part of the trailer is creating the controversies. Is the director raising the demand of a division of the country through this dialogue and presenting the negative image of Pakistan where Pakistan is a country of helpless and poor people. Along with the country, many social activists of Pakistan and the people of the media are expressing their protest through the social media platform on this trailer and also so many users in India also try to support the division of the country in the name of the freedom of the film.
Gavie Chahal and Deana Uppal are in the leads. Other star casts of the film are Mohan Aghasey, Mohan Joshi, Surendra Pal, Antara Banerjee, Vishal Sharma, Jan A Bostock, Major Vikramjeet, Ajit Shinde, Ashutosh Kaushik, Kaaramveer Chaudhary, Sadanand Sharma, and Devesh Panwar. “Yeh Hai India” has already been big hit on its world premiere. It had also been screened at Cannes film festival, Google and Facebook Headquarters and made Indians proud worldwide.
The film has already won best film and best director award at the FOGSV Film Festival, in the US and a special jury mention award at JIFF. After making Indians proud in many countries, “Yeh Hai India” is coming to Indian cinemas on 24th May, 2019.
The movie is in Direction of Lom Harsh, till now his every film is been an award winning. He is a spectacular director with amazing direction skills. Lom Harsh is an Australian citizen but his native is in Rajasthan. Till now he has won more than 25 awards and nominations for his films. Last year he has also been honored as Youth Ambassador for Peace by Universal Peace Federation at the Parliament of India, New Delhi.
On this occasion, Director, Lom Harsh, said that “Today everyone knows about what is going on in the country, we all talk about equality, law and order, but the most questionable is the law and order condition in the country. In the film Yeh Hai India we have talked about such things. We tell everyone how rich our history is and today the youth of the country is making the nation proud at the global level but we have talked about the helpless category of the country without being afraid anyone should have full freedom to speak up.
We talk about humanity and love but today, on a very simple matter, someone kills people with a rage, we have presented such topic in the film with different perspective.We have full confidence that today’s youth will talk openly. Our country is great but if there is something wrong in it, then we should also speak openly on it.
Actor Gavie Chahal said that “I just want to say on this dispute that we have made an honest movie and if you love and respect your country, it is not necessary to praise the country only if anything is wrong then raise the voice against it. It means to put your point in without any pressure. I believe that before watching the film, don’t make any opinion on the objection to any dialogue or scene.
The film will present a new image of India, presenting the modern India with the achievements of the country’s glorious history, human values and prosperous tradition and the leading inventions in humanity, love, modern science and play all over the world. India has earned remarkable success in the box office, with the appreciation of audience in the international market and releasing in India on 24th May.
Yeh Hai India, follows the story of a 25 years old NRI, who is born and brought up in U.K and shares the same stereotype views of India, which is known for its vast population, pollution and poverty. However, protagonist finds new development in media or probably an ‘other side of same coin’ of India, which is also known for successful mars mission in first attempt, a nation which proudly holds title ‘God of Cricket’ for Sachin Tendulkar, who is again an Indian and a nation which is known for its holy generosity with icons like Mother Teresa”. The film was shot in Rajasthan, Bihar, Mumbai, Uttar Pradesh, Madhya Pradesh and Gujarat.
Also Read :   4-day CII Chandigarh Fair to commence from 26-29 Oct at Parade Ground