NewZNew (Chandigarh) :  The 29th edition of the SJOBA (St. John’s Old Boys Association) Sub-Himalyan Open Rally, a FMSCI recognised motorsport event will be bigger and tougher this year. This is one of the oldest and the most exciting three- day motorsport rally which is set to take off on May 7. The event has two major categories: ‘Challenge’ and ‘Endurance Trial’. Challenge is the extreme category of the event, which is all about high speed. The ‘Endurance Trial’ is based on the Time-Speed- Distance (TSD) format.

While addressing the media persons here today, Founder ,  SJOBA,  Mac Sarin said, “The 29th edition will showcase thrill of the rally, off-road and high performance driving. The challenge is bigger as we have added new competitive sections for the participants and people will see how tough bike and car racing can be. The participants will have to face a new route in Himachal Pradesh. Our volunteers have been criss-crossing the mountains, mapping the every bend every detail of the new route from last few months. Keeping in mind the safety measures, the new route has been finalised where the medical assistance will also be available”.

The President of SJOBA, Gautam Khanna said that this was one of the most professionally organised rallies today and it attracts professional and budding rallyists from all over the India. He apprised media that rally will be flagged off by Deputy Commissioner, Chandigarh, Ajit Balaji Joshi. “A new feature has been added this time as Super Spectator Stage (SSS) will be held at sector 34 on the night on May 7 where rallyists will showcase their best driving and rallying skills.

Nipun Mehan, Deputy Clerk of Course, said that there is good news for competitors that this time prize money has been increased by 40 per cent. 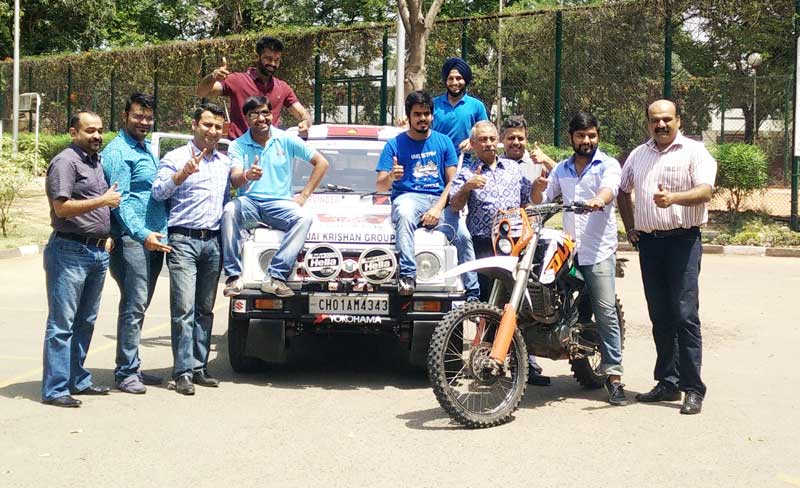 In a bid shed some light on the on the new Route, Deputy Clerk of Course, Nikhil Jaspal, said, “The scrutiny of the vehicles will take place on May 7. On May 8 May (Day1) Route for competitors would be – St. John’s high school Chandigarh -Thapli-Badisher-Naina Tikkar-Kangar-Dilman-Gaura-Chail-Kalog-Kaithalighat. Day- 2 Route includes Challada – Koti Village – Kaithalighat – Kalog- Jhajja – Ashnikhad- Dilman- Kangar -Bhojnagar- Chakki Mor. In Jeep/Car category the winner who will bag first position will take home Rs 60, 000 and for second slot, Rs 45,000 and for third position, Rs 30,000 have been decided. In the bike category the first prize would be of Rs 30, 000, second Rs 22, 500 and third would take away Rs 15000”.

Cultural centre inaugurated at Dikshant Global School to give platform to...