NewZNew (S A S Nagar) : At a ripe age, when most women are staring at menopause, 49-year-old Gurjeet Kaur from Karnal fought off all odds to give birth to ideal twins – a girl and a boy – albeit by IVF conception on a very auspicious day at that – the first of the New Year.

For Gurjeet Kaur and her businessman husband Terjeet Singh (55), Dr Suneet Tayal, Consultant – Obstetrics & Gynaecology, Fortis Hospital Mohali, proved no less than a messiah, as anxious moments, because of the highly complicated, high-risk pregnancy, turned into moments of sheer joy for the couple as the twins were successfully delivered – a baby girl (2.085 kg), followed by a baby boy (2.020 kg). The newborns were immediately shifted in the care of neonatologist Dr Sunil K Agrawal to the state-of-the-art neonatal ICU, where they were kept under observation for a few days before being discharged from intensive care. 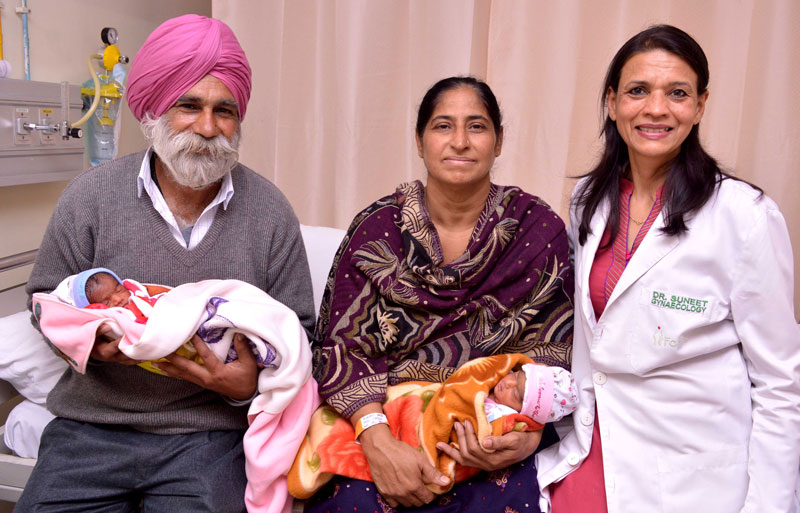 Says Dr Suneet, “Gurjeet Kaur, who was suffering from severe diabetes on high doses of Insulin, underwent IVF conception in Karnal, having suffered a miscarriage earlier. The patient was wheeled into the hospital emergency on the morning of January 1, 2016, with complaint of breathlessness. She was into 33 weeks of a highly complicated, high-risk pregnancy. It was always going to be a difficult case and we had accordingly raised our preparedness to the highest level of management of such cases. The teams at Neonatal ICU, Anaesthesia and Blood Bank were informed and kept ready. The patient had premature rupture of membrane (water bag broke), so she was rushed to Operation Theatre for emergency caesarean section. We were all prepared for any intra-operative complications most of all being excessive bleeding in such case. Blood Bank and Anaesthesia teams were all geared up,” she added.

“Both mother and the babies are doing well,” said Dr Suneet. She added, “Advanced maternal age (over 35 years) is associated with increased obstetric and perinatal (just before and after birth) risks, as is documented in numerous national and international studies. With advancement of age, the odds of getting chronic diseases during pregnancy and for caesarean section increases. Due to this, there are greater chances of preterm birth, low birth weight and perinatal mortality. Thus, children of older mothers always run a high risk of these.”

Talking about the risk associated with late pregnancy and twins, the doctor said, “When the mother is older and pregnant with twins, the risks increase manifold. In fact the adjustment to reproductive technique (IVF in this case) is crucial as studies have found that preterm birth and low birth-weight is more common in IVF-twins. Thus, the babies run the risk of breathing difficulty due to immature respiratory system, heart problems, brain-related complications, gastrointestinal issues, etc in the short term. In the long term, these babies run the risk of cerebral palsy, impaired cognitive skills, vision or hearing problems or chronic health issues. Our Level III NICU with specially trained staff and 24-hour backup is equipped to handle all such complications.”