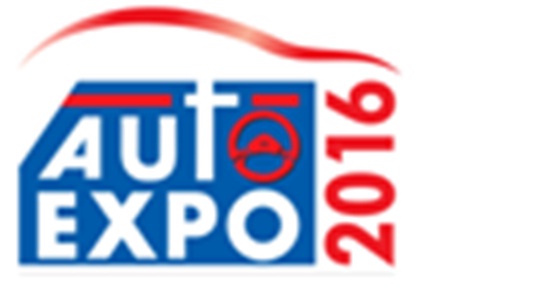 NewZNew (Chandigarh) : The 13th edition of the Auto Expo, jointly organized by ACMA,CII, and SIAM, accredited by OICA is  being held  from 4-7 February, 2016– Components Show  at Pragati Maidan and 5-9 February, 2016 – Motor show at India Expo mart, Greater Noida respectively.

Spread over 80,000 sq mts in 18 halls, this year the expo will see participation from 1,500 companies (50 new entrants) including 900 Indian companies and 600 International exhibitors. Seven exclusive International pavilions from China, Canada, Germany, Japan, Taiwan ( ROC), South Korea and the U.K.  will display a array of components Overseas buying delegations expected from around 15 countries. Dedicated pavilions for bearings and garage equipment and live demonstrations of advance technologies will be showcased. With a view to encourage an innovation driven mind- set amongst the youth, “ Passion for innovation” – a contest for Engineering students, is also being organized on the sidelines of the event. Continuing the endeavor to share knowledge and build awareness, ACMA’s campaign against counterfeit products, the Asli Naqli show, and other focused conferences will be organised in the upcoming edition of the Expo.

Also Read :   Applications invited for Journalism Honour in the memory of Simmi Marwaha

The gross indoor exhibition space at the forth coming show has increased to 73,000 sq mts. from the previous edition of 69,000 sq mts. The venue has witnessed enormous construction in the form of six large halls with an additional carpet area of 37240 sqms complete with air conditioning and adequate power supply cabling. The venue previously had only 8 permanent halls measuring 27,648 sq mts, as a result in the 2014 edition the remaining display was curated in temporary hangers measuring 32,400 sq mts.

Mr Vinod Dasari, President, SIAM, said “Auto Expo has conventionally been one of the most sought after platforms for the automobile industry. We believe that Auto Expo gives the much needed thrust to the industry in totality and ensures that the participating brands get noticed at a global level. We applaud the efforts that have gone into making this edition of the Auto Expo bigger, better and more exciting. The team has put in cohesive efforts to ensure that the run to the expo is smooth and every minute detail is taken care of.”

We hope that this edition of Auto Expo will be the harbinger of a strong & sustained revival in the fortunes of the auto industry. Mr Dasari added.

Addressing the gathering Mr Arvind Balaji, President, ACMA, remarked, “The auto component industry is making a conscious effort to graduate from Build to Print to creation of Intellectual Property. In line with ACMA’s theme for this year – Make Quality & Technology in India, a unique Innovation Pavilion will be set up at the Auto Expo 2016 – Components which will have on display Auto Components designed, developed and validated in India.  The primary objective of this pavilion is to showcase the product development prowess of the component sector as also help deepen the automotive value chain in the country. Several new components are also expected to be launched at the individual company stalls at the Auto Expo.”

Describing it as a ‘unique and special show’, Mr Chandrajit Banerjee, Director General CII, elaborated,  Auto Expo has seen a tenfold  growth from 152 exhibitors to 1580 exhibitors in 2016, which is phenomenal over a period of 30 years. The show has been growing from strength to strength. Mr Chandrajit Banerjee further observed that Auto Expo 2016 would further witness unveiling of 80 new vehicles.

Mr Deep Kapuria, Chairman Trade Fair Council, CII stressed on R & D and Innovation as a growth driver for the automotive sector, Auto Expo would pave way for  more collaborative approach between the various elements of the value chain – the component manufacturers, OEMs, Machine Tool Suppliers, and the raw material industry. If we have to grow from being locally competitive to be globally competitive, our relationship must graduate from being transactional to a symbiotic one, He added.

Jindal Sanjeevani Hospital to be established at an investment of over...