Baba Gazi Dass Ji Club (Society), a non-profit social organization, has announced to organize a two-day Sports Mela on 12th – 13th February, 2018 in Roopnagar. The major attraction of the event will be sports like Kabaddi and Tug of War competitions.

Mr Davinder Singh Bajwa, President, Baba Gazi Dass Ji Club (Society), said, “I am feeling delighted while announcing the two-day sports event for young and aged men and women. This is an initiative with a vision  for a drug free Punjab .Outdoor activities keep our body fit and fine. As they say a healthy brain lives in a healthy body. Hence, we have planned this mega event for the benefit of all. I hope people will like our efforts in keeping the society happy and healthy.”

The second day, on 13th February, four teams will compete in a tug of war competition. The first prize for this event is Rs 15,000 and second prize Rs 11,000. A separate contest for the elderly people will also held at the same ground with similar prizes. Five families of martyrs will be felicitated at the function. There will also be all open kabaddi matches where  value prizes to be distributed amount to Rs. 11 00,000 lakhs  .The best performer will be awareded with a brand new Bullet motorcycle. 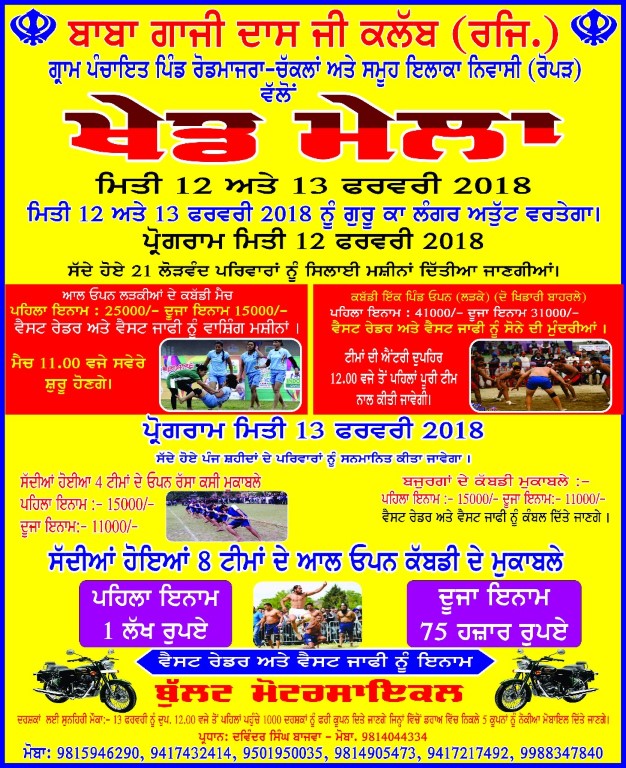 Mr. Bajwa further added, “There will be teams of men and women and senior citizens also to participate in the respective events.  The prize money will be Rs 11,00,000 which will be given to the winning teams (men and women). Apart from this, a Bullet motorcycle is to be won by the best male player and a washing machine for the best female player. We will also distribute stiching machines to 21 needy rural women for their empowerment.”

It was also mentioned that the first 1000 spectators, who will reach at the ground before 12 O’clock on 13th Feb will be given free coupons, out of which five lucky winners will get a Nokia mobile handset.

Design Competition for LOGO of ARCHITECT