Wynk Music, the popular OTT music app from Airtel, today said that it has crossed 75 million app installs, underlining its growing popularity as the go to destination for music lovers. 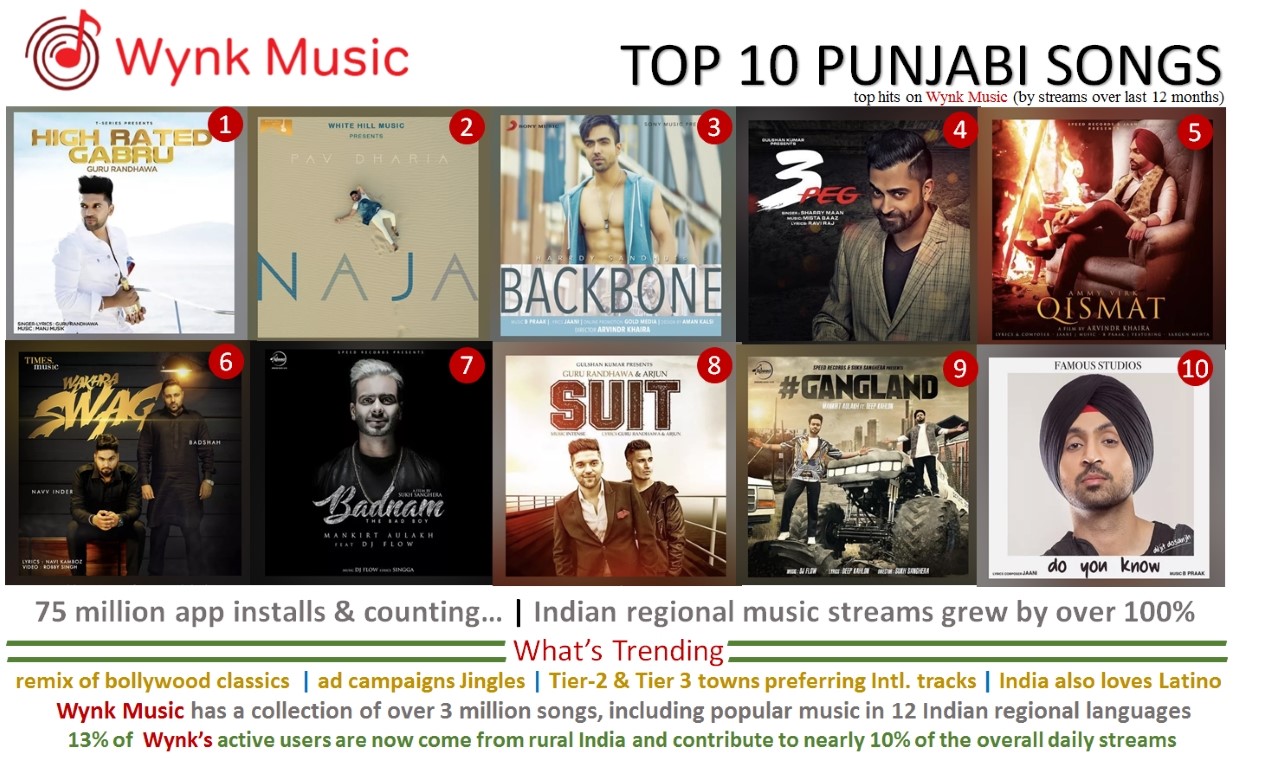 Overall song streams on Wynk Music have seen solid growth on the back of strong demand for local content. While overall music from Bollywood continued to rule, it was Indian regional music streams on Wynk that stole the show and grew by over 100%.

Wynk Music has a collection of over 3 million songs, including popular music in 12 Indian regional languages. It has streaming partnership rights with nearly all content providers and labels in the industry providing users an unmatchable entertainment experience. Music in languages such as Tamil, Telugu, Punjabi & Kannada accounted for bulk of the 100% growth in regional content. [Please see charts below to see popular regional hits].

Another highlight of Wynk Music’s growth story has been that 13% of its active users now come from rural India and contribute to nearly 10% of the overall daily streams. These customers too looked up for content in their local languages.

Some other highlights of what customers have been listening to on Wynk Music:

Top hits on Wynk Music (by streams over last 12 months).

·         Customers in India clearly have a thing for Remixes – The remixed versions of Bollywood classics to the latest hits continue to grow in popularity and made up for 13 of last year’s top 50 tracks on Wynk, contributing over 3% to the overall streams in the year.

·         Jingles all the way: In a new trend, songs featured in popular ad campaigns went viral on Wynk Music. Levi’s ‘Live as You Dance’ campaign pushed Makeba by Jain into the limelight, as did the iPhone X campaign for Best Friend by SofiTukker feat. Nervo.

·         Tier 2/3 towns look up for international music: User interest in international music continued to grow. And it was users from Tier-2 & Tier 3 cities that drove a lot of streaming thanks to increasing familiarity with artists via social media. Shape of You by Ed Shereen crossed 100 million streams to break all popularity records on Wynk Music.

Sameer Batra, CEO – Wynk, said, “It is really gratifying to see the overwhelming response from our users. We believe it’s an outcome of our unrelenting focus on innovation to deliver a great in-app experience driven by superior content curation with sharp focus on regional music. Affordable smartphones and increasing penetration of high speed data services will continue to add to the uptake of music and other content on smartphones. At Wynk, we will continue to bring more exciting innovations to make add to the music experience of our users.”