NewZNew (Chandigarh) : Right since the show began, the entire nation has been raving about their talent as the l’il actors on Zee TV’s India’s Best Dramebaaz have left everyone in awe of their sheer versatility and utter cuteness! The crackling chemistry between judges Sonali Bendre, Vivek Oberoi & Sajid Khan and the fun camaraderie between hosts Rithvik Dhanjani & Ravi Dubey has connected beautifully with viewers across the country. 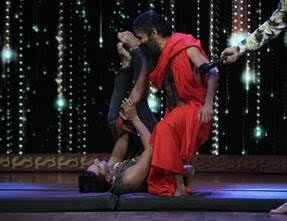 This week, the audiences will be in for a wonderful ride as the renowned Yoga guru Baba Ramdev will make an appearance on the sets of India’s Best Dramebaaz. Not only the kids but even the judges and the hosts of the show were looking forward to see the Guru. The excitement was palpable and kids were going berserk to meet and interact with the ‘Yoga Guru’.  In a candid mood, baba ji was seen having a lot of fun with the little kids and answered all the questions thrown at him.

Well, being a yoga guru, Baba Ramdev gave children yoga lessons to control aggression and focus their energies in the right direction. While the yoga tips were certainly a treat to everyone, the icing on the cake was when Baba Ramdev challenged the most charming anchors Ravi Dubey & Rithvik Dhanjani for a Kushti competition. Excited at the prospect, Rithvik accepted the challenge with open arms but to everyone’s surprise was beaten hollow by the guru. Having seen his best friend getting thrashed, co-anchor Ravi was terrified to even participate. However Baba Ji didn’t leave him either and beat Ravi in a wrestling bout. 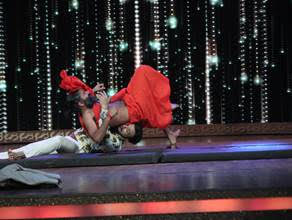 Entertaining to the core, the competition proved Baba Ramdev’s grit that lies in his mental strength and can beat an individual of any age, size or physical prowess. Even as Baba Ramdev had a great time on the sets enjoying all the performances by the little kids, the act that truly gave him goosebumps was the one presented by the talented Kartikey Malviya and the beautiful Bibechna Gurung. The patriotic act on Bhagat Singh showcasing the struggle of the freedom fighter was certainly a treat to watch. Moved to the core by the performance, Baba Ji shared, “As a child I always looked up to the great Bhagat Singh, he was a man with wisdom. I’m impressed with the act, it left me speechless.”

While all the kids, judges and hosts enjoyed Baba Ramdev’s presence throughout the episode, even baba ji was seen having a gala time!

So, this weekend be prepared to be blown away by the dazzling talent of India’s most mischievous brat packs on ‘Surf Excel India’s Best Dramebaaz co-powered by Patanjali Kesh kanti’, every  Saturday–Sunday at 9:30 PM, only on Zee TV.