NewZNew (Chandigarh) : Australia set a new record run chase at the Gabba in Sydney on Friday as they cruised to a seven wicket victory over India in the second one day international. 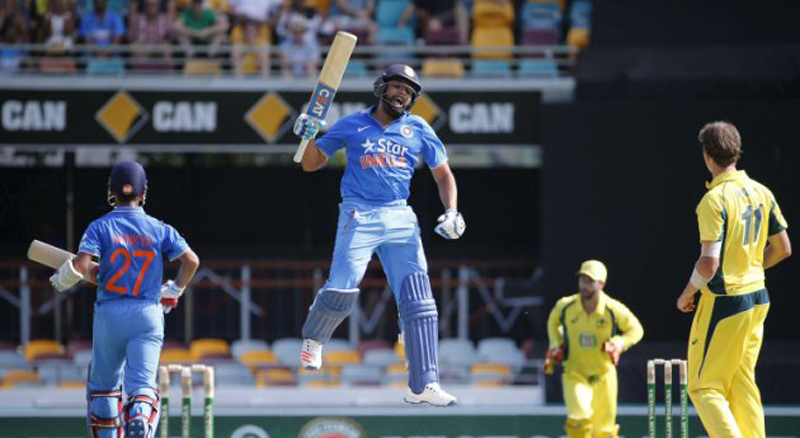 After Indian captain Mahendra Singh Dhoni won the toss and chose to bat, the visitors finished their 50 overs at 308-8, thanks largely to a second successive century from opener Rohit Sharma (124), following his 171 not out in the first ODI in Perth on Tuesday.

But the total always looked too small to defend on a flat Gabba wicket and once Australia’s openers Aaron Finch and Shaun Marsh put on a 145-run stand, the result never looked in doubt.

Finch and Marsh both scored 71 while captain Steve Smith (46) and George Bailey (76 not out) continued their good form as they guided Australia towards the victory total.

India had some hope when Smith was bowled by Umesh Yadav going for an ugly heave with the score on 244, but Bailey and Maxwell put on 65 runs from only 49 balls to see Australia home with six balls to spare.

India looked to be well in the game as the two Australian openers started slowly, struggling with their timing and placement.

The Indian bowling was far tighter than it had been in Perth and the required run rate began to creep up.

But after the first drinks break the Australians began to attack at every opportunity.

Finch brought up his 50 in the 21st over and Marsh in the 22nd as the two openers began to accelerate.

Finch raced to 71 then tried to smash left arm spinner Ravindra Jadeja over mid-off only to be caught brilliantly in the deep by a diving Ajinkya Rahane.

Marsh was dropped for a third time on 69 in the slips but this time it didn’t cost India, as two runs later Ishant Sharma squared him up and he got a leading edge to Virat Kohli at cover.

But Smith and Bailey calmly went about their work and batted India out of the game.

He enjoyed big partnerships of 125 with Kohli (59) and 121 with Rahane (89) as the Indians punished a below-par Australian attack.

Although the score was the biggest by an international team in ODIs at the Gabba, the Indians looked headed for a much bigger total until they lost a clatter of wickets in the final few overs.