DRecords is the exclusive rights holder to rare live recordings of India’s super talented song writer, composer and performer Daler Mehndi and in keeping its promise to bring to music lovers such rare gems by the artist par excellence on regular intervals, we are proud to release this very exclusive and rare gem of a Live performance, titled MAA – The Navratri Special, on the occasion of Navratri. 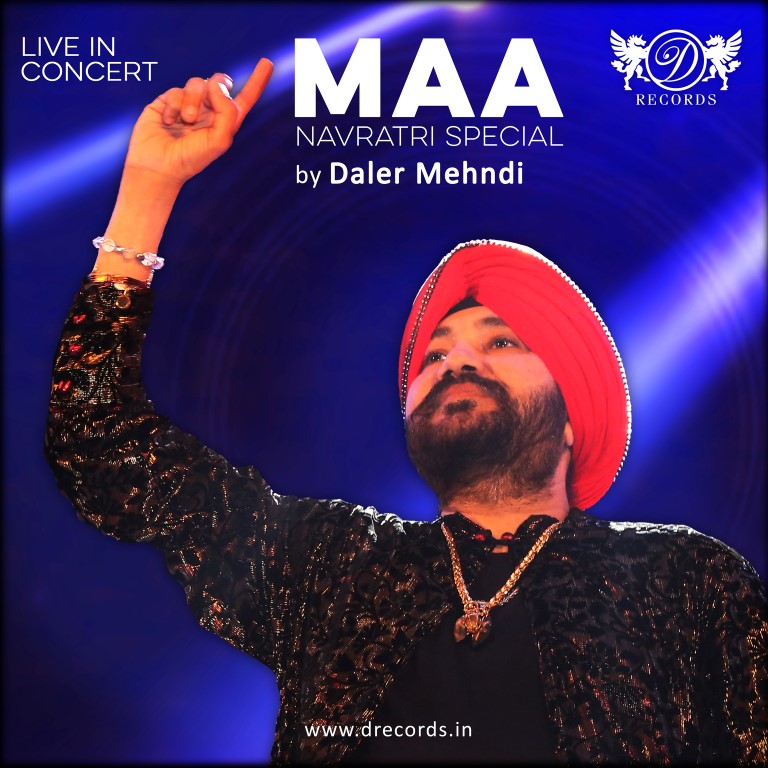 That Daler Mehndi is the undisputed King of Bhangra is given, Nanak Naam Jahaz Hai (Bhaag Milkha Bhaag) Bahubali, Dangal,Mirzya singer has enthralled the world with powerful and soulful renditions in various Bollywood movies,  but the singer also made a name in the Sufi World by being the recipient of the prestigious RUMI FOUNDATION AWARD this March of 2017, he has been intermittently releasing some exceptional Gurbani content over the years of which Rajan Ke Raja (Bani Dasm Granth), Japji Sahib (a unique rendition, the first ever recording of the Japji by any singer /ragi in the world,  touching 32 ragas), Chaupai Sahib to the record breaking 300 Saal Guru De Naal commemorating the 300 years of installation of Sri Guru Granth Sahib, Dukhbhanjani Sahib, the marvelous Waheguru album to name a few.

Apart from the goose bump creating flawless singing, the Artist pleasantly surprises us with the  explanations – direct from the heart, strong statements giving an insight into his spiritual nature and thoughts. He doesn’t mince words, is straight forward absolutely sans rhetoric.

All in all it is brilliant listen, evoking feeling of love for the benign Adi Shakti and all her incarnates – the Goddesses of Shakti, Bhakti, Lakshmi, Gyaan, Daya, Love – called lovingly by different names.

From Pop to Sufi to Gurbani is this a deliberate plan?

I started my music career with singing Gurbani, shifted to Ghazals while I was in the US. It was Pop music that gave me name, fame and recognition. I have been singing Gurbani always, its just that the media is taking notice of it now. Infact I recorded my most successful Gurbani album title Waheguru  while doing the Coca Cola Tour Daler Da in 1999, and after a 5 year research on Japji Sahib, I recorded it –  which I consider as a gift from Guru Sahab to me. I feel belonging to a Sikh family, every sikh has a very Sufi bent of mind. Our Gurus exposed us to the love of Bhagat Bani that of Bhagat Kabir ji, Farid ji amongst other Bhatts (Bards) or Bhagats belonging to various faiths and this spiritual journey in the process made my heart open to other faiths.

I am currently busy with my Pop concerts but singing pop doesn’t type cast me into that genre although my maximum body of work is in that genre. So its not a deliberate plan, I feel it’s a natural progression of an artist, any artist to try various subjects.

Tell us about this album MAA?

Maa comes from a Live performance that I did in New Delhi on the occasion of Durga Ashtami. Subject wise it comes from a heart which is in gratitude of the Bhagwati – the Adi Shakti. I hadn’t attempted such content earlier. So I sat with my team two days before the performance and composed these three songs while writing the lyrics side by side – for the performance. That the performance will turn out like this is highly gratifying. After the concert  the audience came teary eyed.