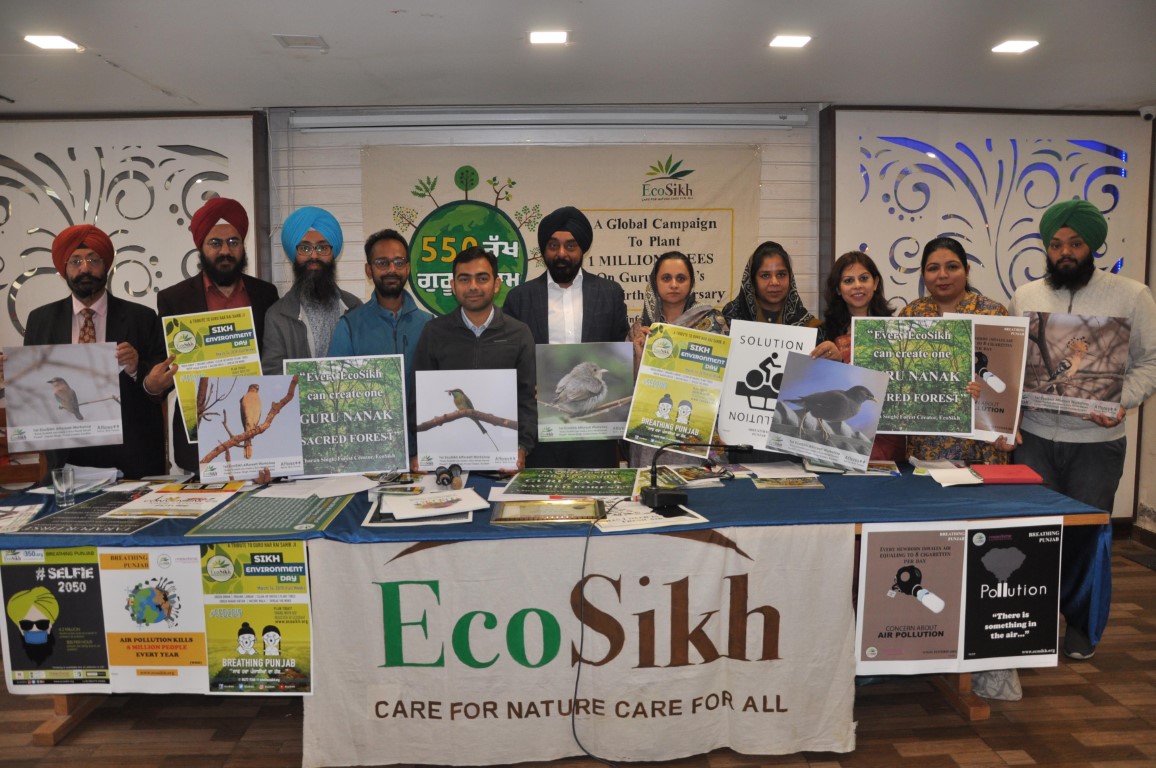 In a 3-day workshop organised by EcoSikh, over 80 trainees were taught the Miyawaki Afforestation Methodolgy and also practically trained by Shubhendu Sharma by building this 100 sq meter forest where they planted 350 trees.

A press meet was held by EcoSikh at Press Club, Chandigarh to announce unveiling of ‘Guru Nanak Sacred Forests project’ and the ‘Breathing Punjab’ initiative . The press meet was addressed by a distinguished panel of environment lovers & experts from across India.

Unveiling the details of the Guru Nanak Sacred Forest, EcoSikh’s Forest Creator, Charan Singh from Mumbai said, “Our 1st forest with Datar Educational and Environmental Trust includes 33 different native species that were planted by the world famous Miyawaki Japanese method and it is also the 1st Miyawaki forest in Punjab. EcoSikh will surpass the target of 1 million trees before the upcoming 550th gurpurab.”

“I strongly believe that every EcoSikh can create one Guru Nanak Sacred Forest.” Added Charan Singh.

Shubhendu Sharma who has planted 132 forests in 16 different countries explained, “We are happy to collaborate with EcoSikh to create sacred forests in the state of Punjab. The Miyawaki Afforestation Methodology of developing mini jungles is a very effective way to bring back Punjab’s lost forest cover.

This is the most effective and natural way with which one can plant over 550 trees in 200 sq meters of space. These forests have more than 99 percent of survival and needs minimum maintenance. The forest grown by this methodology grows 10 times faster, they are 30 times denser, 100 percent bio diverse and natural.”

This is needed in North India as according to the 2018 World Air Quality Report, six cities of Punjab namely Mandi Gobindgarh, Amritsar, Jalandhar, Ludhiana, Patiala and Khanna and five cities of Haryana namely Gurugram, Faridabad, Jind, Rohtak and Punchkula have featured in the list of most polluted cities of the World. Among Punjab cities, Mandi Gobindgarh ranks at the top at 26th position followed by Amritsar at 57, Jalandhar at 82 and Ludhiana at 95 position.

Gaurav Gurjar, Jungle Tree Expert, from Afforestt Jodhpur shared his experience, “I have witnessed that the only jungles that we are left with have some community ownership and are sacred. It is great that EcoSikh has re-initiated the concept of sacred forests that are native and bio diverse. These forests would serve as the genetic banks for the future generations and ensure its co-existence and survival.”

Ravneet Singh, EcoSikh Project Manager declared EcoSikh’s plans to continue such sacred forests across Punjab and other parts of India and abroad, “EcoSikh and Afforestt will be conducting 10 such workshops in Punjab to revive Punjab’s lost forest cover and create a generation of forest creators and climate warriors. It is now the right time for the community to come forward to show their commitment to the great Guru and practice his message by planting 1 million trees on their lands. The community has already given us over 40 such proposals for making the forests.”

EcoSikh India President, Supreet Kaur also launched EcoSikh’s launched newest awareness initiative on air pollution, ‘Breathing Punjab’ in partnership with the US based 350.Org which will be operational in Ludhiana and Chandigarh to guide the citizens on air pollution and how to cope with the rapidly deteriorating air quality in the cities and the rural areas.

“This project will be managed by a local NGO, Prasan Chetas Foundation in the tri-city and the EcoSikh team in Ludhiana. As per WHO air pollution kills 8 million people each year including 6 lakh children who die at an early age. Every hour 800 people die just because they are not breathing the right quality of air.

Despite this, least attention is being given by countries to check air pollution. Under the newly launched projects EcoSikh will work with 350 Org to support the state government to create awareness for health of citizens, especially children and the elderly.”

Kin of Punjabis Killed in Iraq to Get Govt. Jobs & 5 Lakh

Aquatic Life – A Green Initative By Adidas Parley At Kidzania