newznew (Chandigarh) : Vodafone India, one of India’s leading telecommunication service providers, is offering gaming enthusiasts a new destination Vodafone U Game-a-Thon, as part of the First Ever 15-day Online Gaming Fest in the country. Available on Google Play Store, the gaming extravaganza kicked off on December 1, and includes several gaming categories including sports, simulation, puzzles, among others.

Vodafone U is a first of its kind, lifestyle proposition designed especially for Young Indians. Vodafone U goes beyond the conventional tariff plan and offers an array of telecom and non-telecom benefits that are best suited to, and complement the dynamic lifestyle of today’s youth. 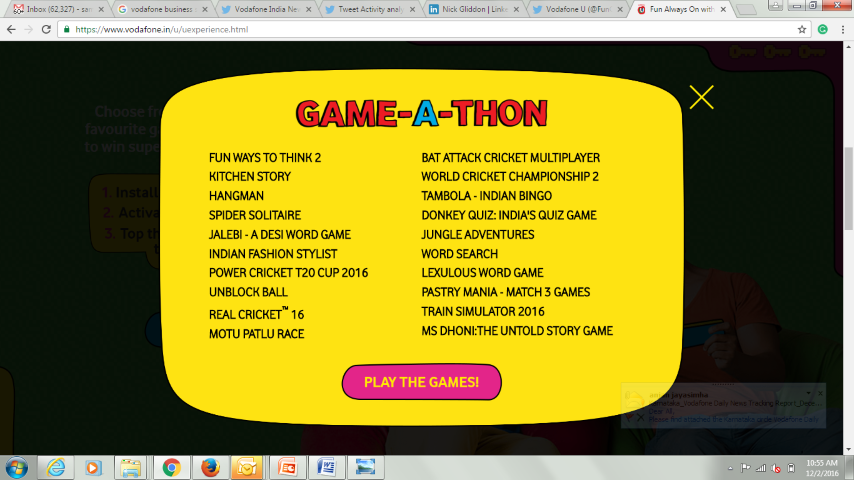 Gaming has a huge Indian following. 71 per cent smartphones users play mobile games on a regular basis and it is the second highest engaging category after chat apps. It is a growing trend amongst youth in India.

As a special initiative targeting this group, Vodafone U and Google have come together to offer passionate gamers an online platform, where they can participate, play and showcase their gaming talents.

Inviting all Vodafone U customers to join in the fun and frenzy of Game-A-Thon, Siddharth Banerjee, National Brand Head, Vodafone India said, “Gaming is an identified passion point amongst today’s youth. Recent reports indicate that in the digital world, games are the second highest engaging category in India after chat apps. Resonating with Vodafone U’s brand proposition of #FunAlwaysOn, we present ‘Vodafone U Game-A-Thon’ a unique platform where our customers will get a choice of 18 indie games to indulge and enjoy.”

Vodafone U customers can participate in the Vodafone U Game-A-Thon from December 1, 2016 to December 15, 2016. Over 18 games are available to play in U mode to avail the prizes on all the 15 days across 6 categories – Action, Cricket, Adventure, Racing, Puzzle, and Strategy.

India has the second largest developer community in the world, yet Indian developers haven’t reached the same scale as their global counterparts. Globally, gaming contributes to over 50% of app revenues and is the largest and most profitable segment of app business. Being one of the largest telecom infrastructure provider, Vodafone is deeply invested in helping developers build successful App businesses. So, to provide a fillip to the ecosystem, Vodafone partnered with the top 18 game developers in India to design a one-of-a-kind Game-a-thon initiative. 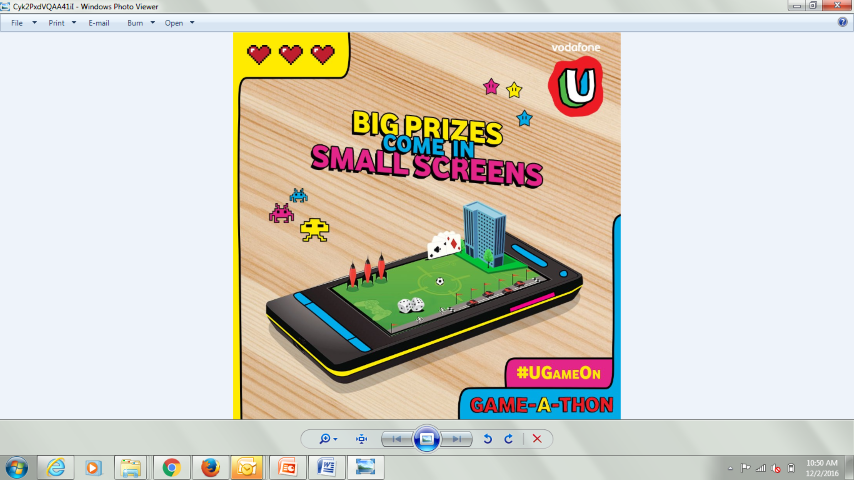 Vodafone U Game-a-thon is currently live and has already driven more than 1M downloads. With a huge youth market, the potential for gaming to grow even further is huge and Vodafone is committed to evolving the gaming ecosystem in India.

Since its launch through a collaborative content by leading youth icons-  Kanan Gill, Raftaar and TVF, Vodafone U has continuously engaged with youngsters to stay always connected with friends and fun via the world of internet, voice, music plus exciting digital offers and experiences. Recently Vodafone U and the musical drama Rock On 2 enthralled Vodafone music lovers with exclusive Rock On 2 with U Concert live at Banguluru, Pune and Delhi. As a part of the initiative, Vodafone invited youngsters to participate in the contest #JoinTheBand, giving them a once-in-a-lifetime experience to chill with Farhan, Shraddha and the Rock On 2 band, backstage.

Vodafone U has also engaged with students through a Back to Campus campaign that promised a Million Fun Experiences to users and participants. This campaign gave the students an opportunity to win an all expenses paid trip to the popular Tomatina Festival in Spain and the iconic Ultra Music Fest in Singapore.