Higurashi When They Cry SOTSU Episode 10: Release Date, Preview & Recap, so let’s find more about this anime here. The mysterious life behind Hinamizawa village will get revealed soon since Satoko is back in her old ways. Satoko is now staying with her uncle while cooking something against Rika. 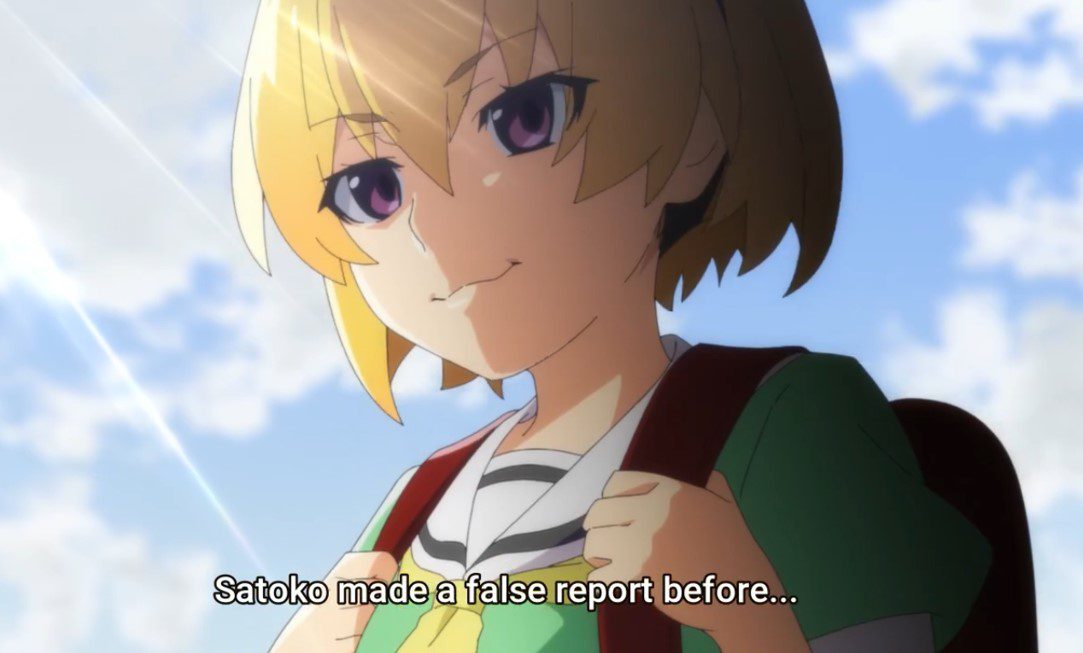 Keichi and other students fell for her trick and think that the Child Welfare Service will look at Satoko’s matter. Satoko traveled and met with Eua; the two revisit the old fragments where Sakoto’s uncle used to torture her.

Join Newznew on Telegram
Satoko realizes that is the only fragment where she had Rika for herself. She told Eua that they have to create a world where only she and Rika are happy, but the rest suffer. Rika must listen to her only and not cared for others. Satoko traveled to the present time.
In the morning at school, Satoko puts on a crybaby act and draws the attention of all students. They try to console her, and she decided to live before school is over. Keichi wonders why the Child Welfare Service is not looking at her matter.

Mion reveals that Satoko once lodged a false report, and it is hard for the CWS to help her since she returned to stay with her uncle at her will. The CWS won’t help because Keichi wonders if they let her get abused until bruised and scarred. Shion arrives and scolds the students for not accomponyi9ng Satokowho is alone.

Mion gets angry and realizes that she killed Shion in another fragment because of her attitude. Shion told the students that they have to do something about Satoko’s matter. Ren supports that, and Keichi suggests making another report to CWS.

Previously on Higurashi When They Cry SOTSU Episode 9

Shion adds that they can go to the offices now or ambush that bastard and beat him to a pulp. Meanwhile, at Satoko’s uncle’s place, he is busy preparing food for Satoko. The uncle has no clues to what is happening since he has mended his way and become a good uncle to Sakoto.

The uncle knows that Satoko is getting into trouble with bullies at school. He took ”Everday Recipes” to check if he is doing his cooking correctly. Satoko returned and wondered what her uncle was trying to do since he poured something flammable instead of cooking oil, and she took the fire extinguisher to stop the fire.

Higurashi When They Cry SOTSU

Satoko comments that her uncle almost burned the house down. The uncle replies that he wanted to surprise his lovely niece with something; Satoko remarks that she is undoubtedly surprised.

Her uncle thought making something Yummy for Satoko would make her feel better. Satoko thank him and wonder what would happen if the villagers reported this to CWS. The uncle realizes that they will be in a big mess if that happens, and Satoko said they are the only trusted people in Hinamizawa.

Her uncle asks her if he should call the CWS to explain things. Satoko reminds her uncle that it is the two of them versus the whole village, and no one would listen to them. Besides, if the Sonozaki family gets involved, CWS will do whatever they say.

The uncle comments that he can do nothing, but he wants to level a happy life with Satoko and why they stand in their way. Keichi and others had to the CWS and decided to get it done.

Later the cop arrives and investigates, but he is surprised to see that nothing is wrong with the uncle and wonders if people are framing him.

Where To Watch Higurashi When They Cry SOTSU Episode 10?