For customers, who want everything in their car, the City variant line-up has been enriched with the addition of a new flagship grade – “ZX”. 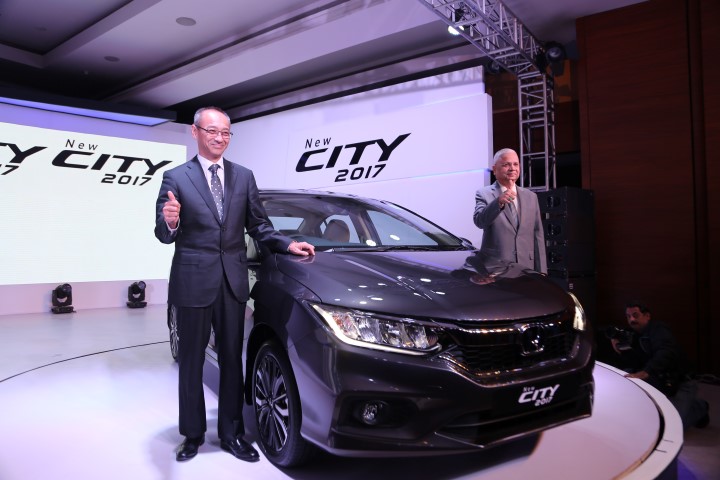 Speaking on the occasion, Yoichiro Ueno, President and CEO, Honda Cars India Ltd. said, “The Honda City has been our most successful model in the country. It has brought joy to over 6.5 lakh customers across the country and has been India’s most successful sedan since its launch in 1998.It has also been the industry benchmark for quality and has been ranked No. 1 by the JD Power Initial Quality Study 14 times since its inception in the Indian market.”

“With the launch of a much-enhanced new Honda City 2017 we aim to exceed our customers’ expectationsby offering amazing value at a very competitive price. I am confident that with the new City, we will regain our leadership position in the segment”, he added.

Also Read :   Young entrepreneur provides you with a viable solution to handle the junk, exjunk.in

The New City has first-in-class soft-touch dashboard on passenger side and new white illumination in the advanced 3D multi-information meter. Other important interior feature enrichmentsinclude chrome plating on steering switches and chrome plated knobs for rear-aircon vent.Tilt and telescopic steering adjustment, new white and red illumination for engine one push start-stopignition systembutton,fully auto-dimming inside rear-view mirrorand new LED interior cabin lights are some of the other advanced& premium features in the new City. The ZX grade also has both rear-adjustable headrests.

The interiors of the new City are premium beige upholstery with dual-tone beige & black trims.

The City adopts the best of Honda’s powertrains to achieve a perfect balance of performance and fuel economy. The Diesel City is powered by the 1.5L i-DTEC diesel engine of Earth Dream Technology series and will deliver the best combination of excellent fuel economy of 25.6 kmpland a maximumpower of [email protected] rpm with amax torque of 200 [email protected] rpm. It has been mated to a 6-speed manual transmission. Further, in the Diesel model, a number of new sound and vibration absorption technologies have been applied to further reduce the NVH levels & ensure a comfortable cabin for all passengers.

The Petrol variant of the City is powered by1.5L i-VTEC engine that delivers a maximum power of 119 [email protected] rpm and a torque of 145 [email protected] rpm. It has been mated with Honda’s innovative andadvanced CVT with 7-speed paddle shifters that delivers top-class fuel efficiency of 18 kmpl along with an effortless driving experience. The 5-speed manual transmission deliversan impressive fuel efficiency of 17.4 kmpl.

Honda has introduced a new flagship grade City ZX with the new Honda City 2017. Apart from the safety features available in the other variants, the ZX grade features best-in-class 6 airbags – front dual airbags, both side curtain airbags and both front seat side airbags. The ZX variant would also include automatic headlights, headlamp auto-off timer and automatic rain-sensing wipers.

Deliveries of the New City 2017 will begin immediately from the HCIL dealer network of 332 facilities in 220 cities across the country. The New Honda City 2017 offers complete peace of mind with 3 years / Unlimited Kilometers warranty as standard benefit to the customer. Additionally, for the first time in the industry, customers can opt for Extended Warranty for additional two years /Unlimited kilometers for extra peace of mind.

Architects come together for Engage Chandigarh