The Cabinet Minister, Punjab, Mr. Navjot Singh Sidhu today outlined his vision regarding the futuristic measures contemplated as well as the achievements of his both departments namely-Local Government and Tourism & Cultural Affairs. In his interaction with the mediapersons here today, the minister also released the ‘Vision Document’ with regard to both the departments and coined the slogan ‘CAPTAIN SARKAR, LOKAN DE DWAR’ regarding Local Government department while the slogan ‘SABHYACHAR TON ROZGAR’ for the Tourism and Cultural Affairs department. On the occasion, the specialized emphasis was laid on providing clean drinking water, and solid waste management facilities to urban population. 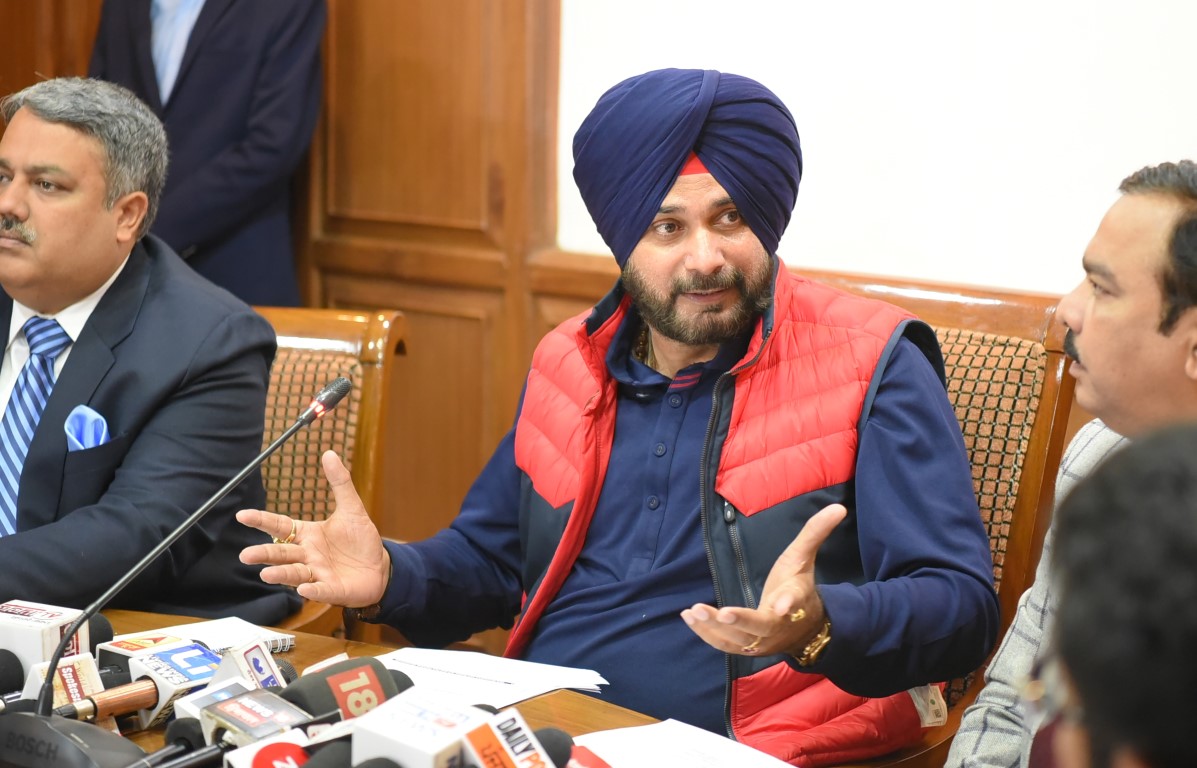 The minister said that the Local Government department is fully committed to the radical transformation of the urban areas and strengthening them economically besides providing services in a transparent, efficient and fast track manner. Concerning the Tourism and Cultural Affairs department, the minister said that the main motive is to connect the youth of Punjab to the glorious cultural and historical heritage of the state by forming a cultural movement. He said that Punjab has immense potential waiting to be tapped as it has significant historical, cultural and heritage related places which could result in tremendous footfall. The minister also detailed that the priority of the department would be to herald a cultural renaissance in the state and generate sources of employment which in turn would lead to the boosting of economic infrastructure.

Mr. Sidhu further elaborated regarding other novel futuristic initiatives and said that the e-Governance project aimed at providing better facilities to the people living the urban centres would be kickstarted in April, 2018 and would come to fruition in December, 2018. The work related to the passing of online maps would be started in this month itself and would be completed by September, 2018. Spelling out another landmark initiative, the minister said that the department has decided to go in for the forensic audit in order to unearth the corrupt practices during the previous eras besides instilling a sense of accountability in the urban local bodies. In the 1st phase, the audit would be carried out in the big corporation cities of Amritsar, Jalandhar, Patiala and Ludhiana and their Improvement Trusts besides 3 Municipalities of Kharar, Zirakpur and Rajpura and completed by September, 2018. Detailing other achievements, the minister said that as a firm step towards women empowerment 50 percent reservation was granted to women in all the Municipal Corporations, Municipal Councils and the Panchayats. This reservation was implemented in the recently concluded elections to the 3 Corporations and 29 Municipalities.

Regarding the BRTS project the minister said that Rs. 495 crore have been released for the project in Amritsar and 3 corridors with in the radius of 31 KM would come up this year. A new advertisement policy is in the offing for the self-sufficiency of the local bodies and all round development of the cities. This policy would be implemented by the April, 2018. He also added that the previous policy of 2012 had many lacunas which are being removed. Furthermore, the master plans of the cities are being notified with the help of G.I.S. based on which the master plan work would get going in the 16 AMRUT cities by 31st January. 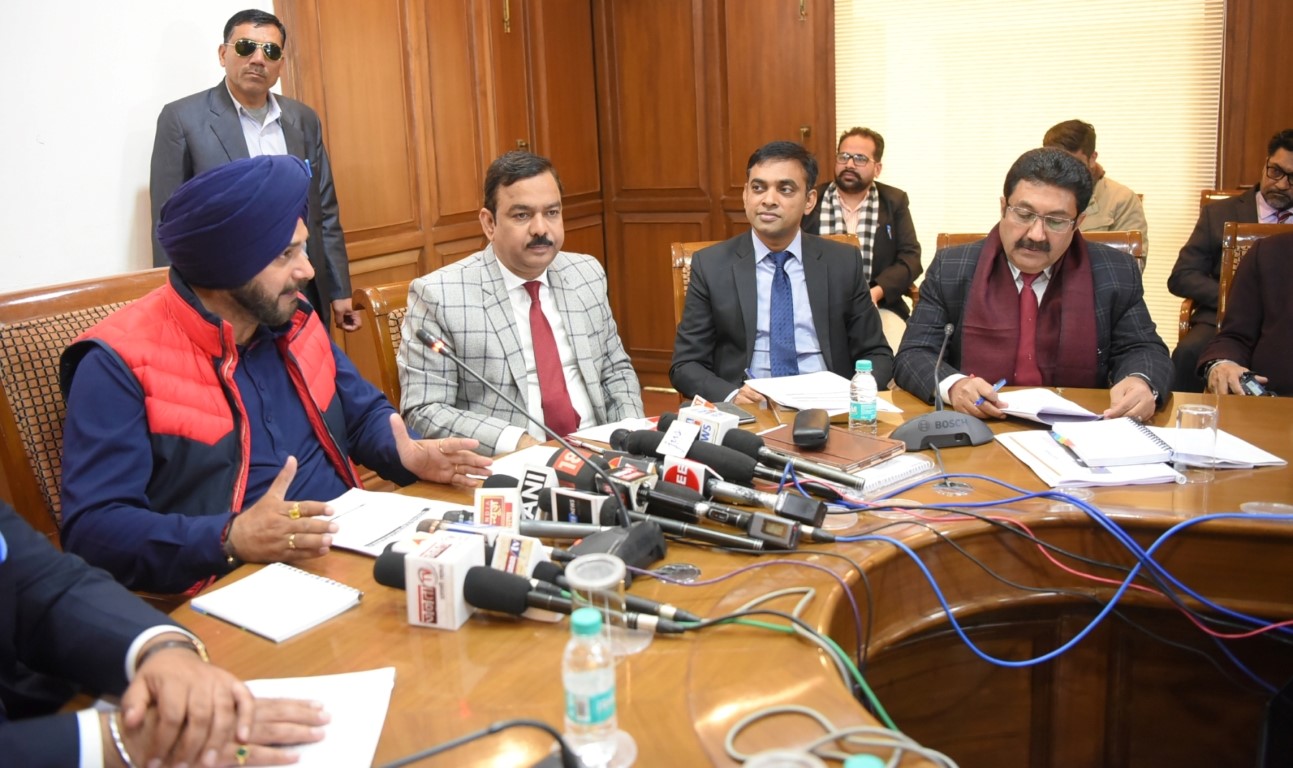 The Unified Building Byelaws are in the process of being put in place by May, 2018. A comprehensive policy is also in the offing for robust parking system in the cities which would be in place by April, 2018. Among other measures, the menace of stray animals in urban centres would be tackled by framing a policy. As many as 46 urban local bodies have been declared Open Defecation Free (ODF) till 31st December, 2017 and 100 more cities would be Open Defecation Free by 31st March, 2018 and all the cities would be ridden of the menace by 30th June.

Disclosing more, Mr. Sidhu said that Ludhiana, Amritsar and Jalandhar are covered under smart city concerning which he met the Union Minister of State for Urban Development Mr. Hardeep Puri who immediately sanctioned Rs. 350 crore for the cities in which the Punjab component would be Rs. 50 crore. Long term planning is being done for addressing the problem of clogged sewerages in the cities apart from providing clean drinking water to the urban population. As of now, 87 percent of the urban populace is getting clean drinking water whereas the facility of clean sewerages is availed by 73 percent of the population. He also said that a detailed programme has been chalked out to provide clean drinking water to the urban population and providing canal water which would be given to the corporation cities of Amritsar, Ludhiana, Jalandhar & Patiala with Rs. 1708 crore, Rs. 2874 crore, Rs. 2000 crore and Rs. 7171 crore earmarked respectively. Also, the super suction machines are being used to open the clogged sewerages. As regarding the Sewerage Treatment Plants (STPs) in Punjab, 64 of the kind were closed in the State of which 40 would be operationalised soon and the farming community would be provided water for the irrigational purposes.

Concerning the Tourism and Cultural Affairs Department, Mr. Sidhu said that a detailed and all encompassing cultural policy was framed, making Punjab the 2nd State after Manipur to do so, for helping the youth to re-connect with the immensely glorious cultural heritage of the state and generating sources of employment. He added that Tourism and Medical Tourism policies are also being given finishing touches which would soon be getting approval from the cabinet. He said that on an average, Amritsar sees daily visitors to the tune of 1.25 lakh and Sri Darbar Sahib is numero uno in the world in terms of tourists’ footfall. The holy city has other important religious, historical and tourist spots and if adequate arrangements are made for the tourists regarding their stay then the city of Amritsar alone can make Punjab No. 1 in the globe from tourism point of view.

Touching another significant aspect, Mr. Sidhu said that circuits are being formed to connect the historically and culturally important spots of Punjab in terms of tourism and Rs. 100 crore have been got sanctioned from the Union Government for religious circuit which comprises Sri Anandpur Sahib, Fatehgarh Sahib and Chamkaur Sahib. Apart from this, places associated with the freedom struggle namely- Jallianwala Bagh, Khatkar Kalan and Hussainiwala are also included in the circuit. A sum of additional Rs. 15 crore has been released  for the Jang-E-Azadi memorial at Kartarpur. In the coming time, Maharaja and Mughal circuits would be given shape and proposals would be sent to the Union Government for getting more funds. The Maharaja Circuit includes Patiala, Nabha, Kapurthala and Faridkot which would be developed and made attractable for tourists. Similarly, Mughal Circuit comprises of serais inside Punjab such as- Shambhu, Doraha, Noormahal and Tarntaran which would be developed as wedding destinations thus paving the way for strengthened economic infrastructure of the State. The town of Kalanaur where the coronation of Mughal Emperor Akbar took place, and Aam Khas Bagh in Sirhind would be developed too. The policy of Medical Tourism would be framed and the  patients from foreign countries visiting India would be accorded specialized amenities.

Batting for making Punjab a favourable destination for shooting movies, the minister said that a Film City would come up in Punjab which would go a long way in ensuring increased avenues of employment. It would also revive the otherwise neglected and dilapidated spots, which are crying over their fate owing to the callous attitude of the previous dispensation. The hotels, resorts and tourist spots connected with the department would be revamped and renewed efforts would be made to make Virsat-E-Khalsa the most visited museum in the country. Programmes would be chalked out to promote diminishing handicrafts, art forms besides creating job avenues for the people connected with these arts under ‘Hunar Naal Rozgar’. A food street would also come up at Amritsar.

The minister also divulged that the 550th Gurpurb of Sri Guru Nanak Dev Ji in 2019 would be observed on a large scale and in the same year the centenary of the Jallianwala Bagh tragedy would be observed as per a specially chalked out programme and homage paid to the martyrs. Apart from this, Sufi Mela, Heritage Melas at Patiala, Kapurthala, Amritsar and Bathinda and Military Literature Festival would be held too. The other traditional and sports melas such as-Harvallabh Sangeet Sammelan, Hola Mohalla, Qila Raipur, Baba Sheikh farid aagman purb and Shiv Batalvi festival and Babe Da Viah purb would be held on a grand scale and given all assistance.

Addressing on the occasion, the Chairman of the Punjab Kala Parishad Padamshri Surjit Patar said that the Kala parishad would take the cultural renaissance to the village level and hold art festivals in every village which would be witness to the Prabhat Pheri, Traditional Music, Folk Music and Cultural programmes. Apart from this, the parishad has set a target to have included atleast 1 period a week in every school-college in which the students would be brought in tune with the art, literary, cultural forms. Special songs for children would be composed and contests would be held of short films focusing on art. An Asian Poetry Festival would be held dedicated to the 550th Gurpurb of Sri Guru Nanak Dev Ji in 2019. The minister also elaborated that a book would also be prepared to conserve the meaningful literature which would include creations of Baba Bulle Shah and famous poets/writers until now.

The Rise of the Internet Entrepreneur