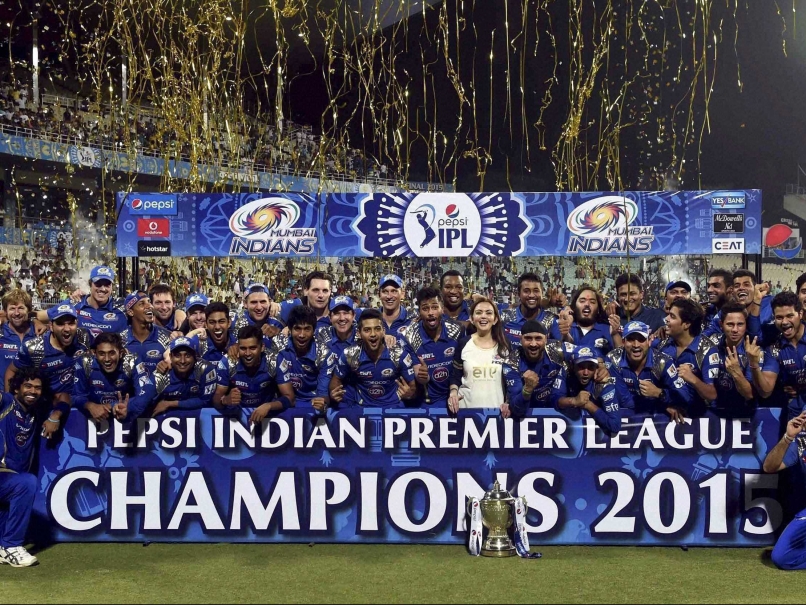 Mumbai Indians’ love affair with Eden Gardens continued as they clinched their second IPL title following a crushing 41-run win over Chennai Super Kings in a lop-sided summit clash, at Kolkata Sunday night. It was a story of a stunning turnaround for a team that lost its first four games. Mumbai won nine of their last 10 matches as all their big players came to the party when it was required.

Mumbai Indians posted an imposing 202 for five as skipper Rohit Sharma (50) and Lendl Simmons (68) rattled up a 119-run stand off just from 67 balls after being invited to bat. The Mumbai captain, who has an ODI world record of 264 and also a debut Test hundred at the Eden Gardens, yet again exploded at his favourite venue. Sharma (6 fours, 2 sixes) and Simmons (8 fours 3 sixes) plundered 19 boundaries in their partnership.

After Sharma and Pollard’s dismissal in consecutive balls, burly West Indies batsman Kieron Pollard (36) in the company of Ambati Rayudu (36 not out) led the side past 200. Mumbai bowlers complimented the good work of the batsmen as they took the fizz out of the Chennai’s chase with a very disciplined effort.

Chasing the huge target, CSK opted to have it easy and concentrated on building a platform after losing Michael Hussey (4) early. Smith and Raina bided their time and looked to consolidate but it meant that they managed only 31 runs from the first six overs. The required run-rate kept on going up and shot past 13 at the midway mark.

Smith completed his half-century in 45 balls but only to be trapped LBW by Harbhajan in his penultimate over. Having made a grand comeback into the Bangladesh-bound Test side, Harbhajan completed his spell in style dismissing Raina. Looking to step out, Raina was brilliantly deceived by the veteran off-spinner who bowled a wide ball and Parthiv Patel did the rest behind the stumps.

With Hussey, Smith and Raina back in pavilion, and skipper Dhoni not looking in his usual elements it looked as good as over for the yellow brigade who choked in an IPL final for a fourth time. Talk about Sharma and his sizzling love-affair at Eden Gardens, and he has done nothing wrong here. A stunning 177 on Test debut, an ODI world record of mind boggling 264, an IPL century (60-ball 109) against Kolkata Knight Riders and an unbeaten 98 in the opening match of this season.

Today was no different. Sharma had come at a time when Dhoni and Co. once again looked ominous with a eye-popping run-out by Faf du Plessis to make MI 1/1 in first over. The South African dived, got hold of the ball and flicked it while being air-borne and the magical throw was enough to clip the bails off to bring an end to Patel’s fine run as an opener.

In came Sharma and after two dot balls, he went in counter-attacking mode hitting Mohit Sharma over third man with an elegant uppercut. He survived a brief scare when he in inside edged one but the ball missed the stumps by a whisker as he blasted 16 runs in the second over that almost derailed CSK.

He not only timed the shots to perfection but the placements were clinical too. Sharma raced to 25 runs from 10 balls and Windies big-hitter Simmons at one point looked a mute spectator at the other end. The MI duo raced to 50 in 28 balls and the power-play yielded a handsome 61/1 as they complemented each other nicely.

With Simmons starting to take charge, Sharma slowed down a bit and rotated the strike cleverly giving his partner maximum opportunity. The Windies big hitter targeted Dhoni’s spin duo of Ashwin and Negi with massive sixes. Nothing going in their way, Simmons was dropped by Negi on 48 as he raced to fifty ahead of Sharma in 35 balls.

Sharma drove Dwayne Bravo for a boundary to notch his 50 from 25 balls but only to be dismissed softly in the next ball hitting straight to Jadeja at long-on. Such agonising was the partnership for CSK that Dhoni and Co huddled soon after Sharma’s dismissal and skipper opted part-timer Dwyane Smith to bowl the next over. Dhoni’s magic worked straightway as Simmons followed suit after being bowled in Smith’s first ball — a slow yorker that he misjudged — to make them 120/3 in 12.1 overs. The twin blow however proved to be too little too late as Rayudu and Pollard propelled to a winning total.