newznew (Chandigarh) : ‘Aaba’, the only Indian film in competition this year at the Berlin Film Festival 2017(Berniale) premiered to a packed house and an overwhelming response at the Festival. ‘Aaba’ is a short film produced by a reputed tricity Educationist-Mitul Dikshit, who is also an ardent film lover. Mitul Dikshit got along-with well known Film Director Raj Kumar Gupta (Aamir, No One Killed Jessica fame) to produce the film. It is noteworthy that the short film is the first production of acclaimed Writer-Director Raj Kumar Gupta’s production house Raapchik Films. The film is written and directed by Amar Kaushik & was part of the Generation K plus competition at the Festival. 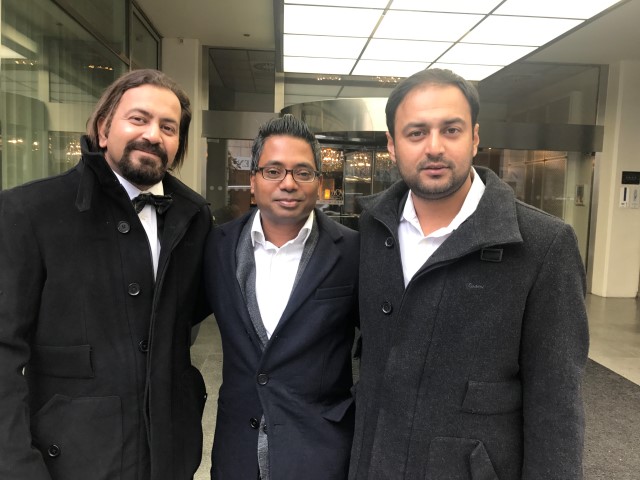 The trio of Mitul, Raj K Gupta & Amar Kaushik was at Berlin at the Premier of Aaba.“The characters and story were so compelling, that we all had it in our heart of hearts that the film will make a mark. Ace film maker Onir too is part of the team that has made Aaba.” Said Mitul Diskhit on the sidelines of the Premier event at Berlin Film festival.

Set in the highlands of India, the story revolves around, a young girl living alone with her grandparents. After her grandfather is diagnosed with lung cancer, she watches as he calmly digs his own grave, furnishing it for his comfort in the hereafter with a handful of his worldly possessions. His light-hearted approach to dying is a gentle acknowledgement of the natural cycle of life and death. But things don’t always go as planned in the land of the living.

Berniale is an esteemed film event and Aaba premiering at the film festival is certainly an achievement for the team behind Aaba. The film has filled the film industry of India with pride as its India’s only entry in the Berlin Film festival. It is a moment of glory also for Chandigarh as it’s been Co Produced by a tricity resident.

Will Pakistan be able to Handle the Pressure of Playing at...