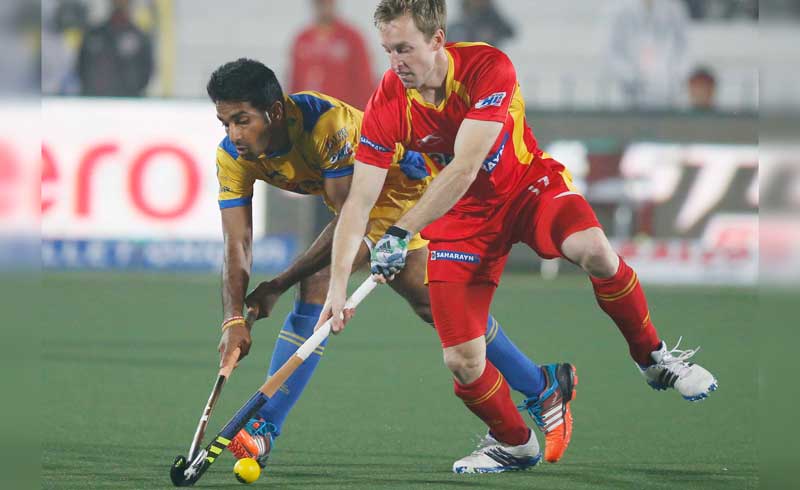 The new look Jaypee Punjab Warriors team who struck in the early moments of the game to take the lead, defended well to register an easy win over the visitors.

The cold evening in Chandigarh did not deter the hockey loving audience to come and watch their home team play against defending champions and arch rivals Ranchi Rays. Jaypee Punjab Warriors began their campaign on an attacking note, which was soon rewarded with a field goal in the 2nd Minute through the stick of Jake Whetton. This gave the home team a huge respite and a much needed early lead of 2-0. This was followed by a dominating game from the home team in both the first and the second quarters.

The visitors, Ranchi Rays played with a higher ball possession in all the quarters but failed to convert any of the chances that came their way. Ranchi played a defensive game for all the quarters absorbing most of the attacks from the home team. The final minutes of the last quarter saw attacking hockey from both the teams with more circle penetrations but none of them were successful in converting it into a goal. The match came to an end with Jaypee Punjab Warriors registering their first win of the tournament.

The Coal India Goal of the Match award of INR 50,000 was presented by Mr. Binay Dayal, Director – Technical, TMCDI to Jake Whetton of Jaypee Punjab Warriors. Jake also walked away with the Man of the Match award of INR 50,000 while Armaan Qureshi of Jaypee Punjab Warriors won the INR 25,000 Hero Emerging Player of the match award. Ashley Jackson from Ranchi Rays won the most entertaining player of the match award.

Jio delivers 10X benefits to JioPhone users when its needed the most: Jio has a substantially high percentage of users that recharge online for...

T-Series & RED FM announce an all-star fundraiser ‘The Care Concert’: One of the largest and most awarded private radio networks in India, 93.5...

Best Watch Web Series and Movies Online During Lockdown: Everyone is stuck at home due to the coronavirus spread across the country. All the...