one-stop destination for all formats of Comedy

NewZNew (Chandigarh) : Tata Sky, pioneer of innovative services in the DTH industry, has added a new service to its diverse bouquet of content named Tata Sky Comedy. This would be the first ever interactive service on DTH in India that provides a single destination for all formats of Hindi comedy content.

The service was launched today in Chandigarh by stand-up comedians Sugandha Mishra and Sahil Khattar, who are also a part of the service. The launch event provided a glimpse of the service courtesy a short video consisting of multiple formats of comedy that were enacted by Sugandha and Sahil. 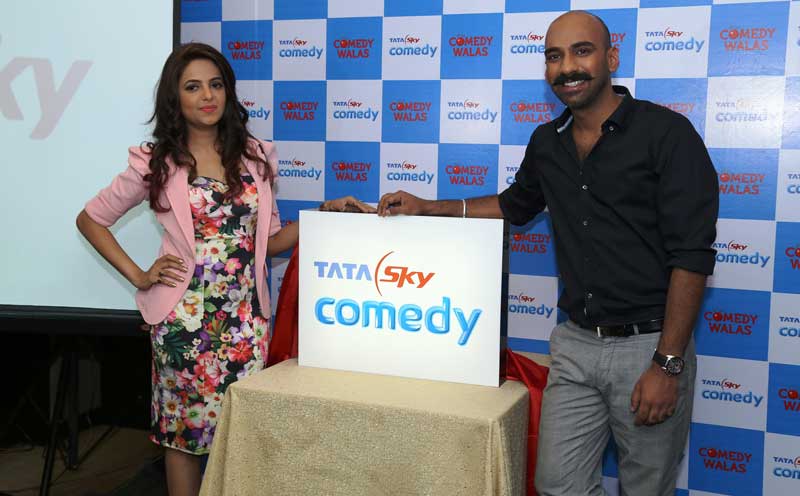 Tata Sky Comedy offers original content created especially for this service along with the best of classic comedy TV shows like Nukkad, Ye Jo Hai Zindagi, Office Office and Zabaan Sambhalke. Every format of comedy content is being made available through this service – from filmy spoofs to fun movie reviews, from gags & pranks to faking news shows – Tata Sky subscribers will now have access to comedy content at their fingertips.

The service is packed with rib-tickling content that is refreshed daily and plays 24X7, ad free. Tata Sky has partnered with Comedywalas, a unit of Shemaroo Entertainment for exclusive and new content such as Bollywood Tadka and Comedy Fatafat. The interactive section of the service features Jokes, Fun Quizzes like Dialogue baazi (based on dialogues from Bollywood movies) and a popular comic strip Suppandi, all of which is refreshed daily.

The service provides non-stop clean entertainment for all age groups, across geographical and socioeconomic boundaries. Now one will not have to rely on comedy content being forwarded or stick to appointment viewing for comedy.

Pallavi Puri, Chief Commercial Officer, Tata Sky said, “With Tata Sky Comedy we aim to provide a fun way to relax for our subscribers. Comedy is a genre that the audiences have a huge appetite for and we believe there is currently a gap for a singular destination for all types of Hindi comedy content. We wish to fill that gap with this latest offering from Tata Sky. In partnership with Shemaroo, it is our attempt to provide a one-stop shop for popular comedy formats that will be available to subscribers 24 hours a day. ”