NewZNew (New Delhi) : With the theme – ‘A Tribute to Humanness’, the 69th Annual Nirankari Sant Samagam will begin on Saturday, November 19, 2016. The venue will be the sprawling Samagam Ground, Burari Road, spread over more than 400 acres of land.

The 3-day Samagam will be the first occasion when Satguru Mata Savinder Hardev Ji Maharaj presides over it. She took over the spiritual command of the Sant Nirankari Mission on May 13 this year, when her predecessor Nirankari Baba Hardev Singh Ji Maharaj merged into his eternal abode. Lakhs of devotees from across the country and outside India are expected to participle. As a matter of fact, many of them have already arrived at the venue. 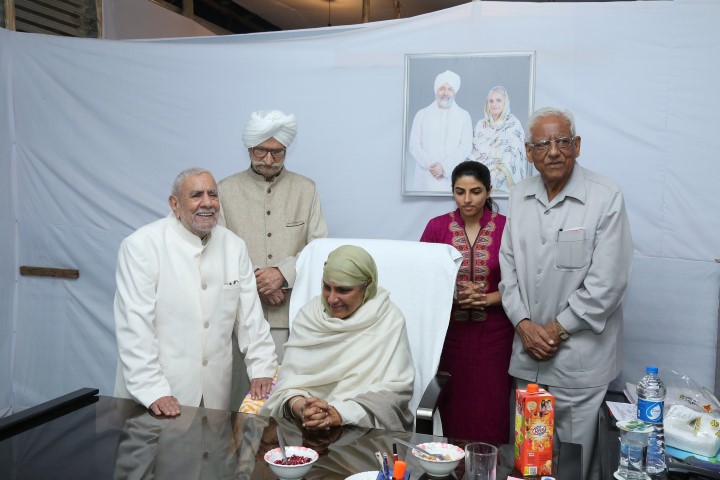 The arrangements for the Samagam are being looked after by the Executive Committee of the Sant Nirankari Mandal which has been designated as Samagam Committee, with its General Secretary Shri V.D. Nagpal as Co-ordinator. The members of the Central Planning and Advisory Board and Central Adhikaris of the Sant Nirankari Sewa Dal are also associated with the Committee. Each department is being assisted by a number of Sub-committees constituted for various activities.

With necessary coordination and cooperation from Government of Delhi and its subsidiary agencies, every arrangement has been made to provide various facilities and amenities such as electricity, water supply, sewerage, etc.

Devotees coming from outside Delhi will be received at the Airport, various Railway Stations and Inter-State Bus Stands and provided transport upto the venue of the Samagam free of charge. Similar arrangements will be made for their return. Besides its own fleet, the Sant Nirankari Mandal is hiring hundreds of Private and DTC buses for this service. Arrangements have been made to provide Railway booking assistance to the devotees coming from outside Delhi.

Free food (Langar) will be prepared and served in every ground. In addition, there will be 22 canteens across the campus which will provide tea, coffee, cold drinks and snacks. Mineral water will also be available at these canteens. Every care is being taken to ensure cleanliness so much so that Langar is being served in steel plates. 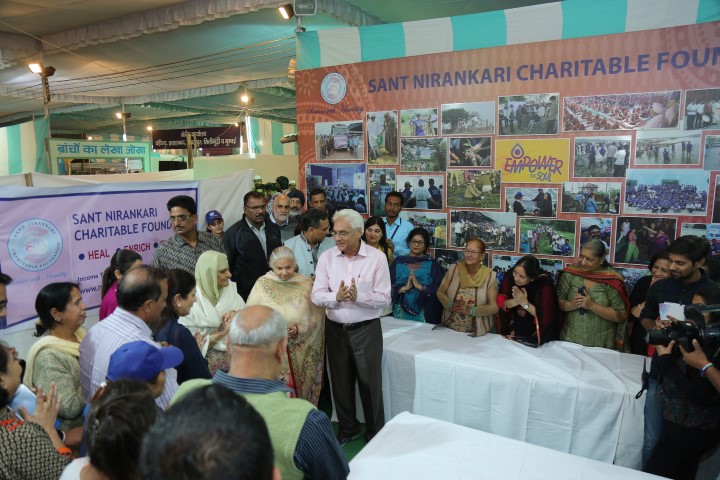 The main Satsang Pandal will be surrounded by offices of various departments. The Publication Production and Distribution Department will be putting up 16 stalls from where the devotees will be able to pick up the Mission’s literature, photographs, CDs, DVDs, Diary, Calendar and other materials. The Department will also register new subscribers for various magazines published by the Mandal.  A Special Souvenir titled ‘Satguru’ with articles in Hindi, Punjabi and English will also be brought out on the occasion.

The Medical and Social Welfare Department will have 15 dispensaries with a total number of 95 beds to look after any health problem the devotees may have during the Samagam. This will include 6 mobile dispensaries deployed by M.C.D. Besides, there will be 9 first-aid posts and 14 ambulances. Arrangements have also been made to take serious patients, if any, to the nearest Government Hospital.

Like last year, a team of about 60 doctors from abroad will put up their own health camp for chiropractic treatment of orthopaedic (Neuro) chronic patients.

The Department of Accounts have made special arrangements with the State Bank of India, Punjab National Bank, Oriental Bank and Bank of India to put up 12 ATM machines spread over all the grounds. These Banks will also put up their counters across the Samagam venue to exchange the old currency notes of Rs.500/- and Rs.1000/- with valid currency notes.

Established in April, 2010 to specially focus on the Mission’s social welfare activities, the Sant Nirankari Charitable Foundation has also put up its stall with a small exhibition to give an idea about its contribution so far as also its future plans. 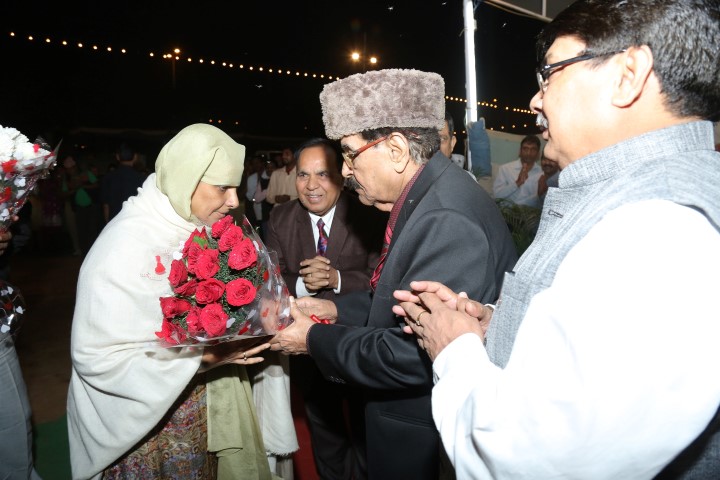 Nirankari Pardarshani, an impressive exhibition based on pictures and models is one of the highlights of the Samagam. It provides a mirror on the Mission’s history, philosophy and the service towards humanity. A special section has been devoted to the contribution by Baba Hardev Singh Ji Maharaj to spread the message of truth, love, peace and unity. Similarly, another section has been dedicated to Nirankari Rajmata Kulwant Kaur Ji. The exhibition will remain open from 9:00 a.m. to 9:00 p.m. daily till the Samagam concludes.

The Samagam will be dedicated to the loving memory of the previous Head of the Mission, Baba Hardev Singh Ji Maharaj with special emphasis on his glorious contribution to promote human values of love, compassion, humility, tolerance, forgiveness and unity. Hence, the theme of the Samagam – ‘A Tribute to Humanness’. Accordingly, the theme of the Poetic Symposium to be held on the last day of the Samagam will be – Karz Chukaya Ja Nahi Sakta Hardev Tere Ahsanon Ka, which means we cannot repay the debt of benevolence showered on humanity by Baba Hardev Singh Ji Maharaj.

Baba Hardev Singh Ji convinced the world that with its spiritual base, the Sant Nirankari Mission’s message finds relevance to the needs of the people of every walk of life. It is providing a common forum to the followers of every religion. It’s promoting inter-faith harmony in the world and thus establishing peace within and calm outside. He called upon every human being to know the Truth and realize God as one supreme entity. This will remove the darkness of ignorance and save us from the delusions and the bondages caused by the same. We shall rise above the names of God and find every religious faith and its prophets glorifying one and the same Supreme Power. And this will end all kinds of discriminations, hatred, jealousy and violence prevailing in the world in the name of religion, caste, colour and creed.

During its first Nirankari International Samagam (NIS) at Birmingham in August 2012, the Mission adopted ‘Harmony in Oneness’ as its theme and added – ‘Let’s Work for it’. The same theme continued to be highlighted in other Samagams that followed in India and abroad. In August 2015, the Youth Conference organized in Baba Ji’s benign presence in Calgary (Canada) was devoted to the theme – ‘A World Without Walls, Bridging Humanity Piece by Peace.’

Baba Hardev Singh Ji planned to hold the Second Nirankari International Samagam in Toronto (Canada) from June 29 to July 3, 2016. The theme given to the Samagam was ‘Humanness’. Obviously, he wanted to emphasize human values and advise man to live with love, compassion and tolerance.

The Mission found tremendous expansion in all directions during the time of Baba Hardev Singh Ji Maharaj. The ever-increasing number of participants in the Samagams in Delhi and other places were the testimony to the fact that the message of the Mission was going home well and attracting the seekers of truth everywhere.

By the time Baba Ji departed in physical form forever, Delhi and Greater Delhi had 35 Sectors, while the country was divided into 74 Zones. There were close to 3000 branches of the Mission in India and about 200 abroad.

It’s with the blessings of Baba Hardev Singh Ji Maharaj that the Mission has four hospitals in Delhi, Kolkata, Chennai and Agra, 154 dispensaries and 10 pathological laboratories across the country – all functioning on charitable basis. The Mission contemplates to set up a full-fledged Sant Nirankari Health City in Delhi for which the ground breaking ceremony was performed by Baba Ji on his 61st Birthday on February 23, 2015. He also inaugurated the Mission’s first Blood Bank in Vile Parle in Mumbai on January 26, 2016.

The Mission has 67 tailoring and embroidery training centres in Delhi and other parts of the country, for the benefit of the widows and other needy women. As regards education, in addition to one College at Sohna in Haryana, the Mission has 24 schools to provide good education even to those who normally find it out of their reach due to financial constraints. The deserving and brilliant students are given scholarships to pursue higher studies and professional courses.

Baba Hardev Singh Ji Maharaj said that ‘blood should flow in veins and not in drains’. So, the devotees of the Mission donate blood with great enthusiasm considering the noble gesture as a part of their devotion. With 4,567 camps and the donation of 7,88,601 units of blood in India as on March 31, 2016 the Mission has already emerged as one of the leading blood donating voluntary organizations` in the county. From April 24, 2015 to March 31, 2016, the Mission organized 494 camps where 79,006 units of blood were donated.

With the blessings of Baba Hardev Singh Ji Maharaj, from 2009, the Mission started undertaking cleanliness and tree plantation drives across the country and overseas to celebrate his birthday on February 23 every year. With the advent of ‘Swachh Bharat Abhiyan’ by the Hon’ble Prime Minister of India on October 2, 2014, the Mission has undertaken extra cleaning drives every year, concentrating specially on the national monuments, beaches and river banks, government institutions, hospitals, Railway Stations, bus stops and the general areas of public use.

Following the Mussoorie Conference held in 1973, Baba Gurbachan Singh Ji laid considerable stress on social reforms like abstaining from the use of intoxicants, dowry-free and inter-caste marriages and so on. This crusade was followed by Baba Hardev Singh Ji Maharaj with great enthusiasm. The followers of the Mission were advised to refrain from taking any kind of intoxicants since their use becomes the root cause of various social evils. At the same time, Baba Ji stressed the need for austerity in the matter of weddings and other social functions. In order to encourage dowry-free marriages, the Mission started organizing mass marriage functions in a big way.