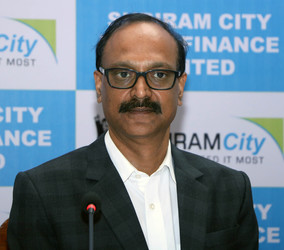 Mr. Chakravarti is a retail finance professional with over 2 decades of experience in the field of financial services. He has also been serving as a Director of Shriram Housing Finance Limited since November 2010. Y S Chakravarti started his career with   Shriram Group in 1991.  He moved to Shriram City Union Finance Company Ltd. in 2008, handling the business in the State of Andhra Pradesh which contributes close to 40% of the overall SCUF retail business. Since 2010, he has been working as Business Head and Chief Operating Officer of the company.

Mr. Duruvasan who was the Managing Director of Shriram City Union Finance since June 2012 has taken SCUF to greater heights and will now continue as Non-Executive Director to guide the current Management and to also ensure a smooth transition. Going forward Mr. Duruvasan’s role will be focusing on the growth and development initiatives of multiple entities in the Group.