It’s Fan Time: This is what Shahrukh has to say to his Fan. During the release of Shahrukh Khan’s movie FAN, many Fans countrywide have been paying their tributes to the superstar. And Yes! It turns out, the celebrity has also appreciated the work of one of his fan. 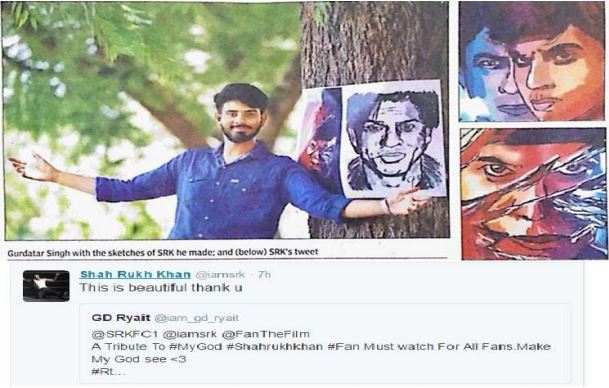 Gurdatar Singh Ryait, popularly known as GD Ryait, a student of Guru Nanak Dev Engineering College Ludhiana and his teamed recently made a short film – A Tribute to Shahrukh Khan. King Khan not only praised this short film in a tweet but also thanked his Fan for such a beautiful work. 21 Year Old boy, Gurdatar Ryait is drawing sketches of SRK and tweeting him from past 6 or 7 years, the star has finally noticed and appreciated the effort and art of his fan.

Media sources have also started noticing and covering the work of this team of GNDEC Ludhiana. This short film is a must watch, especially if you are an SRKIAN. Watch this great work by Gd Ryait, Harnoor Singh , Varmeet Singh , Kumar Sourav and others. Watch his video below:

Lava revolutionizes e-Education with a range of tablets for students