Punjab Cabinet Okays Establishment of Punjab State Vigilance Commission: To bring in more transparency and check corruption among public servants, the Punjab Cabinet approved the establishment of a multi-member Vigilance Commission, in line with the vision of Captain Amarinder Singh, who had steered the constitution of a similar Commission back in 2006, which was however scrapped by the Akalis when they came to power in 2007. 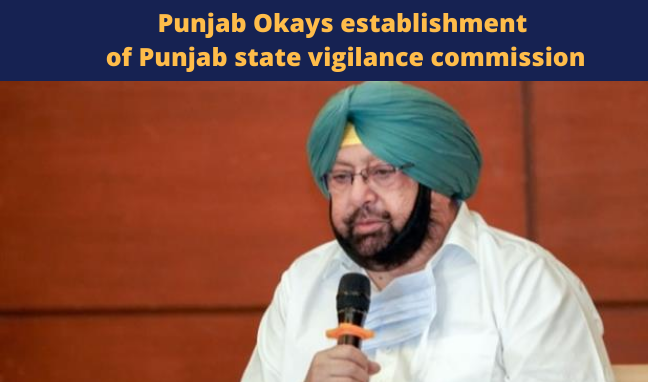 Chief Minister Captain Amarinder Singh, who has been empowered to make any changes in the Ordinance once drafted by the Law Remembrance, in order to ensure the creation of a fool-proof mechanism to look into all issues in detail and deliver justice in all fairness.

The Punjab State Vigilance Commission shall review the progress of investigations conducted by the Vigilance Bureau and cases of prosecution sanction pending with various departments of the Government. The Vigilance Commission shall tender advice to the various departments of the Government, and other investigations on Vigilance matters. It has been empowered to give directions to the Vigilance Bureau for discharging the responsibility entrusted to it. It has also been empowered to inquire or cause an inquiry/investigation to be made in respect of allegations made under the Prevention of Corruption Act and other relevant offences against public servants.  Also Read: Haryanas Ayushman Bharat has a bagfull of achievements in its 2 years feat

Giving details after the Virtual Cabinet meet, the spokesperson said the Commission will consist of the State Chief Vigilance Commissioner as Chairperson, to be appointed from amongst those persons who have been or are serving as Judge of a High Court or an officer in the rank and pay scale of Secretary to Government of India.

Two Vigilance Commissioners will be appointed as members from amongst persons who have been or are in an All India Service of in any Civil Service of the Union of State or in a civil post under the Union or State having expertise and experience in matters relating to vigilance, policy making, administration (including police administration), finance (including insurance and banking law) in the rank and pay scale of the Additional Secretary to the Government of India or the Financial Commissioner of the State. Both the Vigilance Commissioners shall not belong to the same service or have exactly similar experience.

These appointments shall be made on the recommendations of a Committee chaired by the Chief Minister with Punjab Vidhan Sabha Speaker, and the senior-most Minister of the Council of Ministers (after the CM) as its members.

Pertinently, there is a Central Vigilance Commission established under the Central Vigilance Commission Act 2003 to enquire or cause to enquire into offences alleged to have been committed under the Prevention of Corruption Act 1988, by certain categories of public servants of the Central Government, Corporations established by or under any Central Act etc. and to exercise superintendence over the functioning of Central Bureau of Investigation. However, there is at present no such body under the State Government.

Meanwhile, the Cabinet today also approved the Annual Administrative Report of Vigilance Bureau for the year 2017.