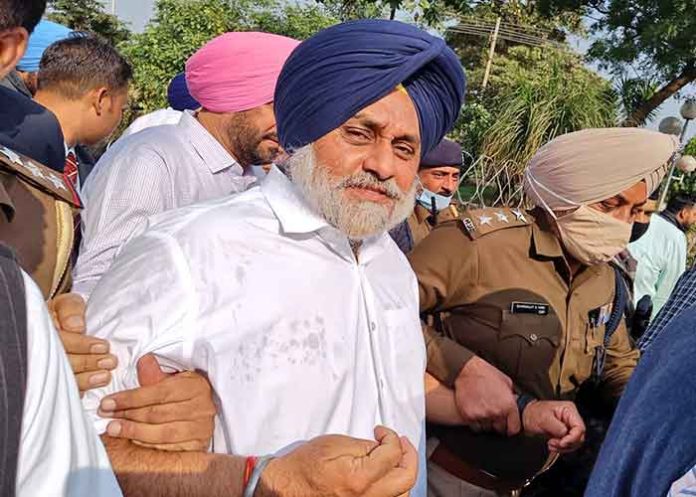 Despite heavy security outside the complex where the MLAs flats are located, senior leaders of the party overcame the barricading to march to the CM’s residence and courted arrest in front of it.

Speaking on the occasion, the SAD President said Pradesh Congress President Navjot Sidhu was resorting to extra constitutional measures by directing the state government to register a false case against Mr Bikram Majithia. “The Chief Minister and the home minister have not only agreed to this demand in order to divert attention from the failures of the Congress government but have also directed the DGP to register the false case. The SAD is very clear in this matter. All such persons will be prosecuted once the SAD-BSP alliance government is formed in the state. We will also establish a Commission to probe these false cases, including those registered against Akali workers”.

Mr Badal also made it clear that the SAD could not be intimidated by such tactics. “We will continue to raise our voice in favour of the people and demand that promises made to them by the Congress party are fulfilled”. He said the SAD would simultaneously continue to fight repression and acts of vendetta against senior party men and workers alike.

Announcing that the senior party leadership had come to court arrest, Mr Badal said “the Congress government has constantly politicised both the sensitive issue of sacrilege as well as the issue of drugs. It is with this in mind that top leaders and the DGP met at the Governor’s Annexe to conspire to frame me in a false case. The conspiracy was however exposed by the SAD. Now again another conspiracy had been hatched to implicate Bikram Majithia in a false drugs case. We will expose this conspiracy also completely”, he said while daring the government to arrest the entire Akali leadership.

AISFM’s students participate in their Graduation Film Fest 2016 held at...