Punjab CM directs AG to file review petition in SC on NEET/JEE Exams: With just days to go for the NEET/JEE exams being conducted amid the Covid pandemic, Punjab Chief Minister Captain Amarinder Singh on Wednesday directed State Advocate General Atul Nanda to coordinate with his counterparts in other Opposition ruled states for filing a collective review petition in the Supreme Court seeking deferment of the examinations. 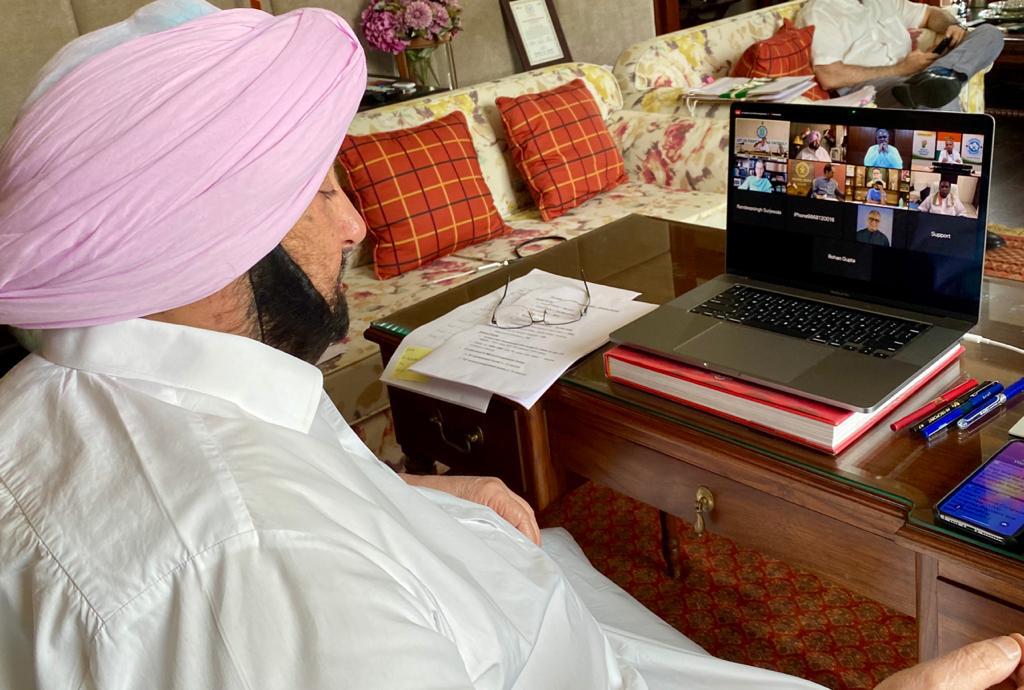 The directive followed a Video Conference of the meeting convened by Congress President Sonia Gandhi with the chief ministers of seven Opposition-ruled states to discuss this and other issues of common concern, including delay in GST compensation release and the farm Ordinances by the Government of India, as well as the New Education Policy, which Captain Amarinder said was thrust on the states without consultation.

There was no time to seek time from the Prime Minister to discuss the issue, said Captain Amarinder in response to a suggestion to this effect. “Let us all get together to move the Supreme Court for postponement of the exams, which are threatening the lives of lakhs of students,” he said. Pointing out that world over, exams were being held online, he suggested that the JEE/NEET and other professional exams like Medical and Law could also be held online and there was no need to put the students at risk.

Noting that what the states were seeking was not the moon but their own dues, the Chief Minister also suggested that a delegation of all the Opposition ruled chief ministers should meet the Prime Minister to press for release of GST compensation and financial assistance to fight Covid. “We have given all the powers of taxation to him through the GST, and now they say they may not be able to pay. So how do we run our states?,” he said, calling upon the Opposition-ruled states to work together and fight together for their rights.

The Chief Minister also disclosed that his government would be setting up a committee soon to assess the impact of the New Education Policy on the state’s education system and finances. Every state has its own system, which the Government of India failed to take into account before announcing the policy, he said.

Pointing out that as of today, two days before the scheduled Punjab Vidhan Sabha session, 23 Ministers/MLAs were Covid positive, Captain Amarinder said if this was the state of the legislators and ministers, one can only image how grave the situation on the ground was. The scenario was not conducive to holding physical examinations, he said.

The Punjab Chief Minister told the meeting that even on the issue of the mandatory final term exams for colleges/universities, despite repeated pleas and reminders, the University Grants Commission (UGC) had failed to take cognisance of his government’s concerns. Citing the importance laid by his government on education, he said that while in schools his government had already decided to promote the students based on their earlier performance, the final term college exams issue remained a matter of concern. “How can we have exams with Covid projected to peak in the state in September?” he asked, adding that “I also want students to take exams and pass too, but how can I do this in the midst of the crisis?”

Captain Amarinder also raised the issue of the Centre’s decision to suspend the post-matric scholarship scheme for SC students, whose number in the state is a whopping 3.17 lakh. The Centre had no business cutting down on these scholarships for the poor SC students, he said, adding that he wanted all students in his state, including the poor, to be educated. Given the acute fiscal crisis in the state, with no money even to pay salaries and fulfill other existing commitments, how do they expect us to pay for these scholarships too, he asked.

Elaborating on the financial crisis faced by the state, the Chief Minister said the Centre’s failure to release GST compensation after March 31, 2020, which is to the tune of nearly Rs 7000 crore, had put Punjab in a difficult situation amid the spiralling Covid cases, which had crossed 44000, with 1178 deaths. “If the Government of India does not give us our GST compensation how do they expect us to function,” said Captain Amarinder, adding that states cannot manage on their own and the Centre needs to support. Punjab had received Rs. 102 crore in 2 installments from Health Ministry for Covid and Rs.31 crore 3rd installment was due, he said.

The state needs money to fight the pandemic, which was now moving from the cities to the villages too, he stressed, citing the 21% revenue loss in the first quarter with anticipated loss during the remaining nine months of the current fiscal at 28.9%. The Government of India had allowed no Revenue Deficit Grant on account of revenue loss due to Covid, he lamented, adding that the Centre did not seem at all interested in the problems faced by the states.

Earlier, in her introductory remarks, Sonia Gandhi pointed to the concerns already raised by Captain Amarinder on the anti-farmer and anti-federal agriculture ordinances of the Government of India.Punjab CM directs AG to file review petition in SC on NEET/JEE Exams.